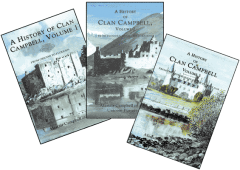 The history begins at the earliest dates for which there is written record relating to Campbell history and concludes in the nineteenth century, after which there is substantial published material on the history of Scotland and the participation of the Campbell Chiefs, the Dukes of Argyll.  After that period, many members of the Clan Campbell were still prominent in Scottish life, but more as individuals than as part of the Clan.

The work is in three volumes:

Vol. I - Spanning the years from the earliest times to 1513 and the death of the second Earl of Argyll at the Battle of Flodden Field.

Vol. II - Covering the period from 1513 to 1685 and the death of the ninth Earl on the block in Edinburgh following Monmouth's rebellion.

The history itself is more than just a history of Clan Campbell.  It is more than just a portrait of the Chiefs of the Clan.  It is a mural in which we can all see and share in the life in the western highlands during the period covered by the work.