Heraldry of The Clan Campbell Society

In all clans the Chief by tradition and courtesy allows members of his clan to wear his crest as a cap badge or brooch, the crest generally being of silver and always set within a circular belt and buckle, the motto of the chief being inscribed upon the belt. Wearing the Chief's boar's head crest is, for Campbells, an expression of symbolic adherence to the Chief and, through him, to their clan.

There is no such thing as a "clan" crest. The various houses of the chiefly kin within the clan have their own arms and crests. For example Airds has a swan, Inverawe a deer's head.

The heraldry of Clan Campbell is probably the most elaborate, fascinating and diverse of any family in the world, since the number of armigerous Campbells is greater than for any other clan. Those who visit Inveraray Castle can see something of the richness of this heritage displayed upon the heraldic family tree of the Campbells in the Clan Room.

Because of strong demand from the Clan Campbell Societies in recent years for heraldic emblems which they could use in parades and at Society tents at Highland Games, without contravening the Scottish laws of heraldry, our Chief created the Federation of Clan Campbell Societies. This enabled him to obtain a grant of arms from the Lord Lyon King of Arms for the Federation which can be used by the Societies who are members. These arms may also be used by the members of the Societies for as long as they are members. Reproducible copies of the art work for these arms is available from The Clan Campbell Society (NA) Journal editor.

The Scottish National flag is the "Saltire", a silver or white cross on a blue ground with the cross being diagonal since it is St.Andrew's cross. All those who feel loyalty to their Scottish ancestry may fly this flag in Canada and the United States, provided it is flown slightly lower than any adjacent United States flag. The Saltire is highly suitable for use wherever overseas Scots gather.

The red and yellow Lion rampant flag is really the personal flag of the Kings or Queens of Scots. Currently the Lion rampart is only flown officially by certain specified people representing the Queen in Scotland. Most native Scots don't know this and use it anyway as if it was the Scottish flag. As matter of courtesy The Clan Campbell Society (NA) could show a more sophisticated style by avoiding the use of this flag. Use of the Lion Rampant also creates problems behind a desk or at a tent since the Journal editor has to attempt to cut it out of any photographs taken.

ARMS OF THE FEDERATION OF CLAN CAMPBELL SOCIETIES

"Gyronny of Eight, Or and Sable, an orle of chains Argent, in the centre point a terrestrial sphere."

The design of the coat of arms as granted, is the gyronny differenced by a silver globe at centre point, to emphasize the worldwide spread of our Clan. The globe is surrounded by a silver chain which represents our common bond of kinship and loyalty to our Chief. The dimensions, design and colors of this banner are available from the Chief Executive of the Clan Campbell.

Where available, it would be very colorful and totally appropriate to fly the heraldic banner of the Federation of Clan Campbell Societies at all Society tents and tables and as the lead banner in a parade (unless the Chief was present with his banner and banner bearer). 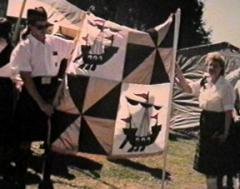 Any members who have been granted arms by the Lord Lyon King of Arms in the law of Scotland can fly them at the Campbell tents, as the late High Commissioner Hugh Purfield Moore did and as the Sennachie Donald Draper Campbell has done. This adds considerable color and authenticity as it was done in the Middle Ages. These can also be carried in parades when the owner marches. Care should be taken to ensure that the dimensions and design of the banner are correct. The shield is reproduced over the whole field of the banner and the helmet and crest are never shown.

Photo of the Chiefs Personal Banner.

The boar's head banner is appropriate to fly at the tents and to carry in parades. The flags mentioned here may also be displayed in the form of a banner hung from a cross-bar.

Tartan banners are an American invention and have no heraldic significance but do have the advantage of demonstrating which is the Campbell tartan authorized for the clan by the Chief. The enthusiasm of some overseas Scots for tartan is not always shared by native Scots. The material was merely the colorful native cloth of their ancestors and, despite some exotic efforts, has absolutely no magical qualities or religious significance.

Calling the American institution of having people with tartan blessed in church a " Kirkin' o' the Tartan" is Lowland Scots. Most Highlanders spoke very correct English since it was the second language to their Gaelic. For Campbells, being Highlanders and originally Gaelic speakers, the event is officially a "Kirking of the Tartan", although that is merely a comical morsel and people will please themselves.

There is absolutely, totally and fundamentally no truth whatsoever, in any way at all, in the "legend" that the idea of having tartan blessed originated during the banning of tartan after 1746. This invention has been traced to an old and very charming minister in Florida who deeply believes that he heard it stated at the original "Kirking" held in Washington DC in the 1940s. If the Rev.Peter Marshall mentioned such an idea at that event, he was mistaken.

The very concept of blessing anything at all other than a human soul was anathema to the Scottish ministers in the 18th century, since it smacked too much of idolatory and therefore of Catholicism, to which they were then vehemently opposed.

The Rev. Peter Marshall, the Scot who became Chaplain to the United States Senate and a famous Christian, should be credited with instituting the "Kirking of the Tartan", a ceremony he first invented in the 1940s as a way to gather Scots to raise their morale and to hear his plea for funds for the British war effort in WWII. Due to the reverse view of tartan sadly held in Scotland today, as symbolizing the shallowness and exploitation of the tourist trade, the whole concept might be considered rather embarrassing and in-appropriate by some in Scotland.

So bear this in mind, your friends and kinsfolk in Scotland may likely never have heard of a "Kirking" as one has never been held in Scotland. It is an honest American-Scots tradition (so long as it stays free of any "legends") with a genuine root in American national history.

While tartan itself may be centuries old, there was no organized system for identifying `clan' tartans much if at all before 1800.

"The Scottish system of heraldry is well controlled and is reckoned to be the purest in the world", so states Alastair Lorne Campbell of Airds, the Chief Executive of Clan Campbell who, as Unicorn Pursuivant, Court of the Lord Lyon, Scotland, is also one of the Officers of Arms for Scotland.

The senior herald of Scotland is the Lord Lyon King of Arms.

Lyon is the Monarch's Supreme Officer of Honour in Scotland. He is also a Judge of the Realm and is responsible, among many other duties, for adjudication of the succession to the Chiefship of clans when in question, the only official recognition given to clans in Scottish law.

In an article in the United States Scots magazine "The Highlander", Airds continues; "For those who reckon heraldry to be out of date, it is interesting to note that the last thirty years have seen more grants of arms by Lyon than in the whole of the preceding period back to 1672. Heraldry is alive and very well in Scotland".

In commenting upon those who are eligible for arms, Campbell of Airds states "... Lyon may entertain petitions (for arms) of any Scotsman - or woman - who is of good standing and can show that they have contributed to the life of the community."

"It is also possible for American Scots to apply for arms. These may be granted if the petitioner can prove his or her descent - in the male line - from a Scottish ancestor born or living in Scotland, or from one born or living in Canada. Those who can prove descent from an ancestor in the male line living in the American colonies before the Revolution are also eligible. This requires genealogical proofs sufficient to stand scrutiny in a Court of Law."

"The arms are actually granted to the ancestor with a suitable difference then added for the petitioner, unless he is the ancestor's heir in which case he inherits the un-differenced form of the arms."

The cost of a new grant of arms is not inexpensive; about one thousand pounds sterling. However if the petitioner can prove descent in the male line from a previous owner of arms, then these arms are awarded with a suitable difference and the cost is reduced to about four hundred pounds. The services of an officer of arms is not included in these figures.

You may see a man's arms displayed in different ways. During his lifetime his eldest son or grandson may display his father's or grandfather's arms with a `label' for difference. A wife may display her husband's arms upon an oval alone or beside those of her father. A daughter or granddaughter may display the arms of her paternal father or grandfather on an oval. Younger sons are obliged to petition for the arms of their armigerous father with a mark of difference.

There are endless and handsome ways in which arms may be displayed, whether on book plates, buildings, furniture, quilts, writing paper or vehicles.