According to the latest research available, St. Patrick (A.D. 5th century, Britain and Ireland; feast day March 17), wasn't born in Ireland at all. The celebrated saint, called by some the "Apostle of Ireland," was born near the town of Dumbarton, in the west of Scotland, about the year A.D. 387. His father, Calpurnius, occupied a respectable station in life, being a municipal magistrate in the town where they lived. The exact town or village where St. Patrick was born is not known for certain, but it is believed to have been Kilpatrick (a small village on the Clyde River five miles east of Dumbarton), Duntochar (another small village about a mile north of Kilpatrick), or Dumbarton itself. 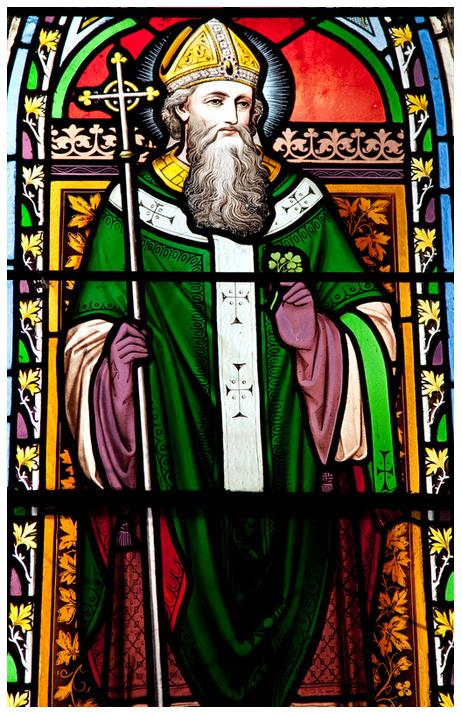 St. Patrick patron saint and national apostle of Ireland, credited with bringing Christianity to Ireland and probably responsible in part for the Christianization of the Picts (an ancient people who lived in what is now eastern and northeastern Scotland) and Anglo-Saxons. He is known only from two short works, the Confessio, a spiritual autobiography, and his Letter to Coroticus, a denunciation of British mistreatment of Irish Christians.

When he was about 16, he was captured by Irish raiders and taken as a slave to Ireland, where he served for seven years before escaping and returning to his family. After entering the Church, he returned to Ireland as an ordained bishop "to minister to Christians already living in Ireland and to begin to convert the Irish."

Familiar with the Irish language and culture, Patrick chose to incorporate traditional ritual into his lessons of Christianity instead of attempting to eradicate native Irish beliefs. For instance, he used bonfires to celebrate Easter since the Irish were used to honoring their gods with fire. He also superimposed a sun, a powerful Celtic symbol, onto the Christian cross to create what is now called a Celtic cross, so that veneration of the symbol would seem more natural to the Irish.

St. Patrick is credited in Irish tradition for driving the snakes out of Ireland, so safeguarding locals from the personification of evil, and driving them into the sea. Ireland did not have an actual snake population living in Ireland at the time. Ireland was the last location on earth that these cold-blooded reptiles would want to inhabit because of the frigid water surrounding the island and the harsh weather. Because the “snakes” that St. Patrick exiled were regarded as a handy metaphor for evil (pretty much any non-Christians), it is far more plausible to believe that they were representative of the Druids and Pagans in Ireland that the Catholics were trying to drive out.

The name Patricius, or "Patrick" in the English spelling, was not used by the man. He may be known as the patron saint of Ireland, but Patrick was never actually canonized by the Catholic Church. This is simply due to the era he lived in. During the first millennium, there was no formal canonization process in the Catholic Church. After becoming a priest and helping to spread Christianity throughout Ireland, Patrick was likely proclaimed a saint by popular acclaim.

So what is the connection to Clan Campbell you wonder? St. Patrick's original name was most likely Succat or Succach, supposed to have some relation to the Succoth area of his birth--the name to this day of an estate not far from St. Patrick's birthplace. It is an estate held for centuries by the Campbell Baronets of Succoth. Imagine that!