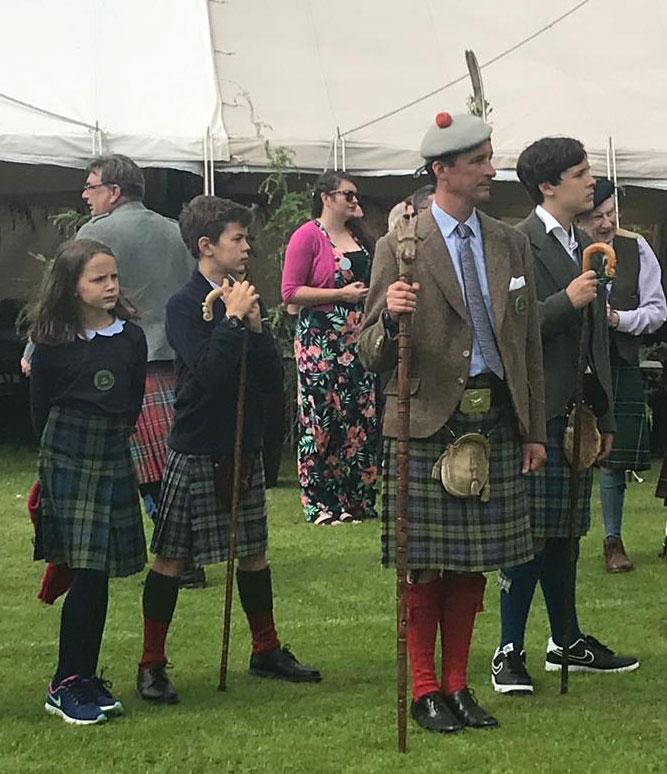 His Grace the Duke of Argyll with his children, Archie Marquis of Lorne (R), Lord Rory Campbell (C), and Lady Charlotte Mary Campbell (L) stand in review at the 2019 Inveraray Highland Games.  The duke carries a boar’s head staff presented to him by the Clan Campbell Society Germany.  Lord Lorne later presided over the Games’ closing ceremonies.

His Grace, the Duke, as his father before him, was educated at Glenalmond College, Perthshire, Scotland. He then went on to the Royal Agricultural College, Cirencester, where he was awarded a diploma in Rural Estate Management. Prior to that, from 1980 to 1983, he had been a Page of Honour to Her Majesty the Queen Elizabeth II. On leaving Cirencester, he took up a post as Assistant Land Agent for the Duke of Buccleuch at the Buccleuch Estates near Selkirk in the Scottish Borders where he remained from 1991 to 1993. The following two years were spent in London working as a sales manager for the Grosvenor House Hotel. Then in 1995 he joined the French Pernod Ricard beverage empire and went to Hong Kong as marketing manager to one of their subsidiary companies, Casella Far East. He is still working for Pernod Ricard as international regional manager for their subsidiary, Chivas Brothers Ltd., a company exporting the group's Scotch whiskies throughout the world. Based in London, he spends much of his time abroad in the Far East.

On April 17, 1892, the 8th Duke of Argyll (Scotland) was created the 1st Duke of Argyll in the Peerage of the United Kingdom. Thus, our Chief, His Grace, The Duke of Argyll is one of only five British peers to hold more than one Dukedom, the others being:

Historically, several other peers have held multiple Dukedoms, including the Duke of Newcastle upon Tyne and Newcastle-under-Lyne, the Duke of Argyll and Greenwich, the Duke of Monmouth and Buccleuch and the two Dukes of Queensberry and Dover and some other mainly Royal Dukes.

In the Scottish Peerage, the Order of Precedence for Dukes is as follows:

The Duke of Argyll's full title is:

The most high, potent and noble prince His Grace Torquhil Ian Campbell, Duke of Argyll, Marquess of Kintyre and Lorne, Earl of Argyll, Campbell and Cowal, Viscount Lochawe and Glenyla, Lord Campbell, Lorne, Kintyre, Inveraray, Mull, Morvern and Tiree in the peerage of Scotland, Baron Sundbridge of Coombank and Baron Hamilton of Hameldon in the peerage of Great Britain, Duke of Argyll in the peerage of the United Kingdom, Baronet of Nova Scotia, Hereditary Master of the Royal Household in Scotland, Hereditary Keeper of the Great Seal of Scotland, Hereditary Keeper of the royal castles of Dunoon, Carrick, Dunstaffnage and Tarbert, Admiral of the Western Coasts and Isles, and Chief of the Honorable Clan Campbell, Mac Cailein Mór.

The Duke of Argyll's Titles and Hereditary Offices: 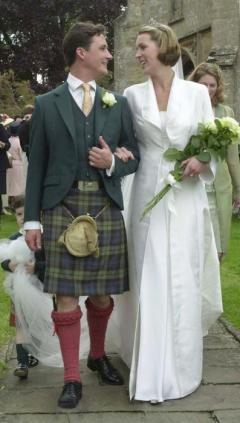 Her Grace, the Duchess of Argyll was born Eleanor Cadbury on 26 January 1973 in London, England. She is the daughter of Mr. Peter Hugh George Cadbury, of Fairford, co. Gloucester, past Chairman of Close Brothers Corporate Finance, and his wife the former Sally Strouvelle, dau. of Peter Frederick Strouvelle, of Cape Town, South Africa.

At the wedding, Eleanor Cadbury, who is a cousin of the family who founded the Cadbury chocolate empire, wore a stunning cream dress and overcoat, while holding a matching bouquet of cream roses. The Duke wore the family Campbell tartan.

The Saturday service was attended by more than 100 guests. The Church of Scotland ceremony was officiated by The Rev. John Willard of St. Mary's and was assisted by, Inveraray parish minister, The Rev. Brian Wilkinson of Glenaray, Inveraray, and featured a Gaelic blessing. The bride was given in marriage by her father and was attended by Miss Alice Palau, George Bruce and Laura Landale. Mr. Jamie Landale was best man. A reception took place afterwards at the bride's home.

Through her marriage, Eleanor Cadbury gained the title of Duchess of Argyll on 8 June 2002.

While the Campbell ancestral home of Inveraray Castle will be the couple's family home, they will be living and working in London, but spending more of their personal time in Scotland. After the wedding, the Duke continued his employment with whisky distiller Chivas Brothers Ltd, while Duchess Eleanor remained with the public relations and communications management firm Weber Shandwick Worldwide, London, England. Inveraray Castle was the setting for a party when the couple returned from their honeymoon

An Heir Is Born

The Duke and Duchess of Argyll currently have three children, two sons and a daughter. Their first son, Lord Archie Frederick Campbell, Marquess of Lorne was born 3:55 p.m. 9 March 2004 at Queen Charlottes Hospital, London, England. (Click here to see a copy of the birth announcement.) He weighed a healthy 7 lb15 oz. Friends said the Duke's mother, Iona, Dowager Duchess of Argyll, and his sister Lady Louise Campbell had joined the couple at the hospital for the birth. The couple split their time between London and Inveraray, where Eleanor, Duchess of Argyll, now works for the Argyll estate. 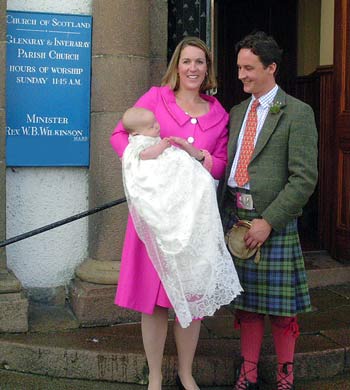 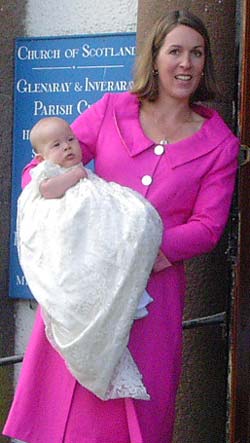 The Marquis of Lorne's Baptism

On Sunday the 29th of August 2004, the baptism of the son of Their Graces The Duke and Duchess of Argyll was held. The Marquis of Lorne was born March 9, 2004.

The young Marquis of Lorne was baptised "Archie Frederick Campbell". The photos were taken in front of the Glenaray & Inveraray Parish Church following the baptism service with his proud parents, Torquhil and Eleanor, The Duke and Duchess of Argyll.

Their Graces the Duke and Duchess of Argyll are very pleased to announce the birth of their second son, Rory James Campbell.

The Duke and Duchess of Argyll and members of both families are delighted with the news.

Members of Clan Campbell worldwide wish our Chief, his wife the Duchess, big brother Archie, and the newest addition to the Clan, Rory, all the best.

Their Graces The Duke and Duchess of Argyll are very pleased to announce the birth of their third child and first daughter, Charlotte Mary Campbell on 29th October 2008.

Lady Charlotte Mary Campbell was born on 29th October 2008 at 16.01hrs, weighing in at exactly the same 7lb 14oz as older brother Rory.

The Duke and Duchess of Argyll and members of the family are delighted with the news. Mother and daughter are both doing well, a familiar phrase, but one which means a great deal to the family concerned.

Members of Clan Campbell worldwide wish our Chief, his wife the Duchess, big brothers Archie and Rory, and the newest addition to the Clan, Charlotte, all the best.

The Campbells of Lochnell are the latest cadets of Argyll, and in default of the male descendants of John, 4th Duke of Argyll, heirs to the titles and estates should the Argyll line fail.

"Vix ea nostra voco" The words are Latin and associated with the Campbell name as well as many other clans and families. The phrase means "I scarcely call these things our own". The motto relates to the principle of stewardship, that we don't really own anything, we just look after what we have throughout our lifetime.