You might have seen something called a Coat of Arms before. Another phrase for coats of arms is Heraldic Achievements. In many places, there is a coat of arms for whole families. But this is not true in Scotland. A coat of arms stands for just one person there. This is because knights used to have their arms on their shields. That way, even when they had their armor on, you could tell who they were.

In the Highlands, men did not wear armor. But they did wear something to show their clan. They wore a plant badge in their bonnets, or hats. Each clan wore a piece of a plant that stood for their clan.

Today, men wear what is called a Clansman's Crest Badge on their bonnets. It is the crest, or the top of the coat of arms, of their clan Chief, or the head of their branch of the family who has his own coat of arms.. It is inside a round strap that has a buckle on the bottom. The strap has the motto of the Chief on it. The buckle shows that it is not your crest, but someone else's. Our Chief, and other people with coats of arms, wears a crest badge without the buckle, which shows that it is his crest.

Here are some of the symbols of Clan Campbell. 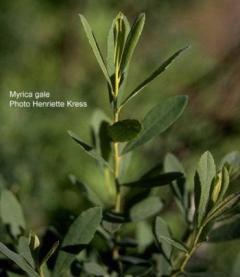 Bog Myrtle  This is the plant that was worn by members of Clan Campbell in their bonnets. It is bog myrtle, a plant that grows in marshy places. 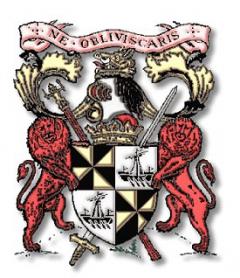 Coat of Arms  This is the coat of arms, or heraldic achievement, of our Chief, Mac Cailein Mor, the Duke of Argyll. The boar's head on top of the helmet is the crest. The Chief's motto is Ne Obliviscaris, which is Latin for Forget Not.

Look at the shield. The sections divided into eight pieces of gold and black are called a gyronny. If you see a gyronny in a Scottish coat of arms, you know that person is a Campbell.

There are over two hundred Campbell coats of arms!

Campbell Crest Badge  This is the crest badge of the main house of Clan Campbell, headed by Mac Cailein Mor. Notice the boar's head crest, and the Chief's motto, Ne Obliviscaris, on the strap.

All Campbells may wear this badge. But people who know that they come from one of the younger houses of Clan Campbell may wear that badge also.

Campbell of Loudoun Crest Badge  This is the crest badge of the first of the younger houses of Clan Campbell, the Campbells of Loudoun. It is a double headed eagle with the motto, I Bide My Time.

Campbell of Breadalbane Crest Badge  This is the crest badge of the Campbells of Breadalbane, also called the Glen Orchy Campbells. It is a boar's head with the motto, Follow Me.

Campbell of Cawdor Crest Badge  This is the crest badge of the Campbells of Cawdor. It is a swan with a crown, with the motto, Be Mindful.

There is one other Campbell symbol that is important to know.

Arms of the International Federation of Clan Campbell Societies  Do you remember the gyronny? Can you see how it was used at the left? There are Clan Campbell Societies in the United Kingdom, North America, Australia and New Zealand. Our then Chief, the 12th Duke of Argyll, registered these arms for use by Society members. That means that, if your family are members of one of the Societies, you can wear this as your own!