The Origins of Tartan Day

Tartan Day originated in Nova Scotia, Canada, with a proposal from the Federation of Scottish Clans. On December 19th 1991, as a result of a push by the Clans & Scottish Societies of Canada, the Ontario Legislature passed a resolution proclaiming April 6th as Tartan Day.

Manitoba was the third Canadian Province to recognize this date as Tartan Day, which was formally done in 1994 although, for several years prior, the Manitoba government had proclaimed the date as Tartan Day on a year to year basis. By 2000, every province but Newfoundland and Quebec had officially recognized April 6 as Tartan Day.

By 2003 Quebec had followed suit, formally recognizing the role that Scots played in the establishment of the province, and in contributing to its economic and cultural development No other cultural group has been so recognized by the predominant French population.

The United States formally recognized April 6 as Tartan Day on March 20th 1998. Proposed by US Senate Republican majority leader Trent Lott, Senate Resolution 155 was passed unanimously. Coincidentally, 1998 was also the year of the passing of the Scotland Act, which re-established a Scottish Parliament after a span of almost three centuries.

Tartan Day is also celebrated in Australia and New Zealand, but is held on July 1st. This date commemorated the repeal the post-Culloden Act of Proscription which banned the wearing of the kilt and other aspects of Highland culture. Additionally, Australia became a Federation on July 1, 1901.

As the Scottish Diaspora fed the populations of Australia, New Zealand and North America, it is understandable that the connection with the land of our fathers should be celebrated in those countries. Interestingly, even France now holds Tartan Day celebrations! 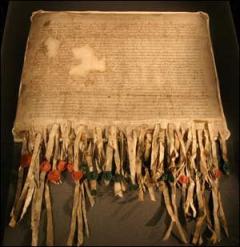 The Scottish Enlightenment was very influential across Europe and helped to shape the thinking behind the American constitution. As did the principles found in the earlier Declaration of Arbroath from 1320. The anniversary of its signing is the date on which Tartan Day is held. Common sense philosophy, and the belief that any man is as good as his master, and that the people reign supreme. These democratic traditions still unite us today in the 21st century. The links between Scotland and North America, both historic and contemporary, run deep and remain strong.

Tartan Day is now firmly part of the North American calendar and a welcome signal that the Scots-North American relationship can only strengthen in the 21st century.

THE CLAN CAMPBELL CONNECTION TO THE DECLARATION OF ARBROATH

One of the signers of the Declaration of Arbroath was Donald Campbell. Donald Campbell was the 2nd son of Sir Colin Mor, "Cailein Mor" and progenitor of the Campbells of Loudoun. "The Scots Peerage" says this about Donald Campbell (p.320):

"Donald, who is first mentioned in 1296, when he did homage to King Edward I., and is called, in the Ragman Roll, Sire Dovenal Cambel del counte de Dunbreton. On 23 August 1294, he and others were warned by Robert, Bishop of Glasgow, not to hold communication with the Earl of Lennox and others. In 1304 he was acting in the English interest and was under the orders of John Botetourte, Justiciar of Galloway, Annan, and the valley of Nith, and on 31 August of the same year, as Sir Donald, he was one of a jury composed of men from the counties of Roxburgh and Dumfries, to inquire as to certain privileges claimed by the Earl of Carrick. Later he joined Bruce, and with his brother Neil appended his seal to the letter from the magnates of Scotland to the King of France, 16 March 1308, in which they declined to go on a proposed crusade till Scotland was free of war. He was also one of the barons of Scotland who signed the memorable letter to the Pope, 6 April 1320. (What a English understatement! ~ RGC) From King Robert Bruce he received a grant in the county of Forfar of the half lands of Reid Castle, which he afterwards resigned to his son Duncan; also of lands 'quhilk is called Veneduloche,' or Benderloch in Lorne. He married a lady called Amabilla, and had issue apparently with others, a son:-- (1) Duncan, to whom his father resigned his land of Reidcastle. He received also a charter of lands in Borgue parish, co. Kircudbright, from Roland Ascolog or Magachen and Katerina his wife, and is described as son and heir of Donald Cambel and of Amabilla his wife. He married Susanna Crauford, and became the ancestor of the Campbells of Loudoun. A seal is still attached to the writ of 1308: the legend is broken, but the shield bears distinctly gyronny of eight, charged with a trefoil slipped, on each alternate gyron. This is probably Sir Donald's seal, as Sir Neil's in 1296 bore only plain gyronny of eight."

There are more people of Scots descent throughout the world than can be found in Scotland. Tartan Day was established for people of Scottish heritage outside of Scotland to show pride in their heritage. The hard work of ex-patriot Scots resulted in prominence in education, government, business, and the military in numerous countries. The Scottish Enlightenment resounded across Europe, and helped in the conceptualization of the American constitution.

The impact of Scots on North America has been huge, and quite out of proportion for such a small country as Scotland. Scots quietly integrated into the culture of their new countries and often are overlooked as a distinct ethnic group in Canada and the United States. In both census taking and history books, Scots are frequently lumped in with the "English" population, making it difficult to differentiate between them.

Despite this tendency to pool descendants of the Scots with the English, recognition and pride in our Caledonian heritage can be clearly noted. President Woodrow Wilson, the son of a Scots Presbyterian minister, said: "Every line in America's history is a line colored by Scottish blood." St Andrews and Caledonian Societies proliferate, along with numerous clan and Scottish family associations. In the USA there are over 20 million people who claim Scots descent and, in the last Canadian census, almost five million people checked the box marked "Scottish Origins."