Tartan is a plaid that means something. There are now over 12,000 tartans listed with The Scottish Reister of Tartans, but less than a 100 of those represent an ancient Scottish clan!

The first tartan book of major importance was published in 1842. Even though Highlanders wore kilts of plaid wool, before the 1800s clansmen wore plant badges in their bonnets so people could tell their clans. Examples of tartan have been found in 2000 year old Roman ruins and as far back as 5000 year old mummifed celtic people.
Today there are tartans that represent clans, families, towns, regions, provinces, states and countries.

How to tell Campbell Tartan

Because there are many tartans that have blue, black and green in them, it can be hard to tell one from another. Here is how to tell that it is really Campbell tartan.

Below is a picture that shows the railroad tracks. 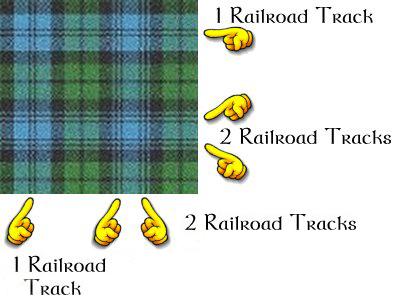