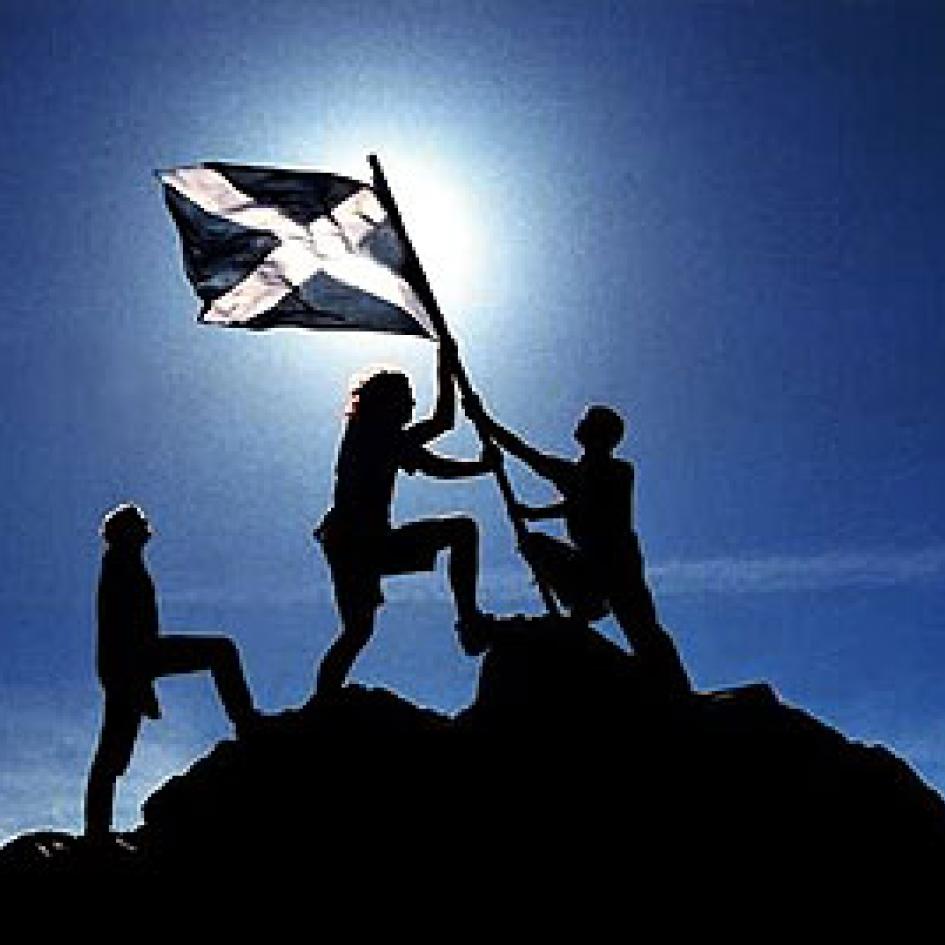 The Flag of Scotland (Scottish Gaelic: bratach na h-Alba; Scots: Banner o Scotland), also known as St Andrew's Cross or the Saltire, is the national Flag of Scotland and the oldest flag in the world.

The Scottish Flag Trust and the Clan Campbell Society (North America) are proud to announce the launch of a joint flag initiative to promote Athelstaneford flown Saltires. The Battle of Athelstaneford in 832 A.D. was the birthplace of Scotland’s national flag, the Saltire.

Washington D.C., U.S.A. / Edinburgh, Scotland - There are a great number of Scottish Societies in North America, such as the Clan Campbell Society (NA), whose many thousands of members take enormous pride in their Scottish heritage. Their pride is evident at the well-established Highland Games circuit across the continent, Tartan Day Celebrations, Robert Burns Suppers, St. Andrew’s Dinners, Celtic Festivals, and in hundreds of Pipe Bands. These Societies assist members in exploring their Scottish heritage, participating in traditional Scottish events, educating the public about Scottish history and culture, and encouraging the display of the Saltire, also known as the “St. Andrew’s Cross”.

National flags are held in high regard in North America. The Stars and Stripes is widely flown in all U.S. public buildings, schools and in many homes. American flags that have been flown at the National capital, in Washington D.C., are particularly sought after by patriotic Americans. Similarly, patriotic Canadians who want to own one of the National Flags of Canada (popularly known as the Maple Leaf), which has been flown over the Peace Tower at the Parliament of Canada in Ottawa, Ontario, must contend with a waiting period that can be as long as ten years.

Due to the joint efforts of the Scottish Flag Trust and the Clan Campbell Society (NA), the first batch of Athelstaneford flown Saltires have been dispatched to the U.S. to arrive in time for display on St. Andrew’s Day, November 30, 2007. Each of these Saltires have been individually hoisted and flown at the main flagpole attached to the Saltire Memorial in the Athelstaneford Churchyard, Scotland and will be only available in limited numbers. Each Saltire has a special logo sewn onto the flag’s hoist confirming it has been flown at Athelstaneford, and is accompanied by a signed and numbered Certificate of Authenticity stating the date on which the flag was flown. The Athelstaneford Saltires are made of the highest quality, machine sewn, U.K. MoD (Ministry of Defence) approved woven polyester fabric, and manufactured to the highest standards of workmanship by one of the oldest and most highly regarded flag makers in Scotland. MoD approved woven polyester is unquestionably the most durable flag cloth in the world. The advantages of using this material include superior color fastness and high tensile strength along with exceptional resistance to abrasion, thus providing increased durability while maintaining a traditional appearance. The Athelstaneford Saltires are made to the authentic dimensions of 4ft (hoist) x 5ft (fly) and the official Pantone 300 Blue as endorsed in the Scottish Flag Code.

Flag Trust Chairman David Williamson said, “We know from entries in the visitors’ book in the Flag Heritage Centre that Athelstaneford is much visited each year by Americans of Scottish descent, almost all of whom indicate how enthralled they are to learn of the historic origins of the Saltire. We are delighted therefore to work with the Clan Campbell Society (NA) on this joint promotion, as it will allow the Trust to further raise the profile of Athelstaneford and Scotland’s national flag in North America”.

Note: The Flag Heritage Centre at Athelstaneford, East Lothian, Scotland opens for the season on 1 April, and is open daily from 9:00 A.M. until 6:00 P.M. each day until 31 October. Visitors to the Centre can enjoy an audio-visual dramatization of the 832 A.D. Battle of Athelstaneford above which the St. Andrew’s Cross appeared in the sky and inspired the Scots/Picts to victory over the Northumbrian Angles. Entry to the Centre is free.