[This article may not be re-published in whole or in part without the written permission of the author.]

This paper was written primarily to assist Americans who are interested in Scottish heraldry to better understand the philosophy behind the etiquette of Scottish heraldry, eligibility issues, and the grant/matriculation process.

There are many Scots and people of Scottish descent, male and female, who are eligible to apply for their own coats of arms and yet have not done so. The Lord Lyon King of Arms in Scotland encourages all who can to do so.

In the following pages, I will attempt to: (1) define armorial bearings, (2) outline the laws and practices governing the use of armorial bearings in Scotland, and (3) outline who is eligible to petition for a grant or a matriculation of arms and how the process works. Another goal of this paper is to provide some guidance on the proper use and display of Scottish Armory and Heraldry. In recent years, the misuses of Scottish heraldry have become a problem at Scottish Highland games in North America primarily from a lack of knowledge and even the “I don’t care – I don’t live in Scotland so I can do whatever I want” attitude. For further reading on the subject of Scottish heraldry, take a look at Mark D. Dennis’ Scottish Heraldry: An Invitation which is published by The Heraldry Society of Scotland and costs £3.00 plus postage.

In terms of proper use of heraldry, the Clan Chief by tradition and courtesy allows members of his/her clan to wear the clansman’s badge which is the Chief’s crest always being of silver and set within a circular belt and buckle, the motto of the chief being inscribed upon the belt. (See the section on The Crest Badge beginning on page 40.) For example, for a Campbell, wearing the Duke of Argyll's boar's head crest is a symbolic expression of adherence to the Clan Chief and the Clan Campbell. 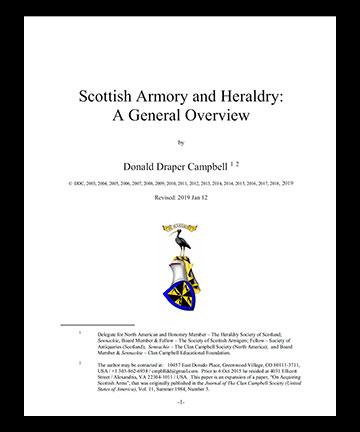 The author may be contacted at: