A HISTORY OF CLAN CAMPBELL, VOLUME 2 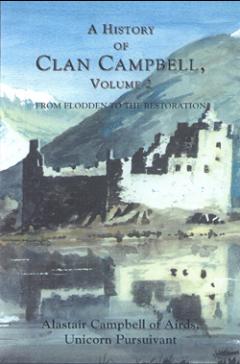 FROM FLODDEN TO THE RESTORATION

Volume 1 of this history ended with the chief and his followers dead on Flodden field. Volume 2 describes the Clan's recovery. Within five years Colin, 3rd Earl, was Vice-Regent and Lieutenant of the kingdom. Within five decades the Clan had extended their possessions to the Western Isles, reinforced their Highland dominance, and become the most powerful family in the nation. How they managed to remain so for a century and a half, despite everything history could throw at them, is the subject of Alastair Campbell's fascinating, vivid and well-paced narrative.

Religious conflict in Scotland during almost the whole of the period was devastating. The Crown vacillated between Reformed, Episcopal and Catholic doctrine whether it was based in Edinburgh or, after 1603, in London. With one exception by contrast the Campbell chiefs held firm to the Protestant Reformation. In 1556 Colin, 4th Earl, invited John Knox to preach at Inveraray; 90 years later Archibald, 8th Earl and first Marquess of Argyll, led the Army of the Solemn League and Covenant. Late in the sixteenth century, however, a crack appeared in the remarkable unity of the Clan: a nationwide conspiracy involving the Campbells of Glenorchy, Lochnell and Ardkinglas led to the death of the Bonnie Earl of Moray, the murder of Campbell of Cawdor, and two attempts on the life of `Grim-faced Archie' ó the 7th Earl who subsequently turned Roman Catholic and in 1617 left to serve the King of Spain. Again, however, the Clan recovered. One of the conspirators, `Black' Duncan Campbell of Glenorchy, scourge of the MacGregors, even received a royal pardon and a baronetcy.

Alastair Campbell describes the onset of the religious and civil wars in the seventeenth century. The greatest figure in Scotland then was the first Marquess of Argyll, an ardent Protestant, who was pitted against the charismatic cavalier, the Marquess of Montrose. On behalf of church and crown in Scotland each led governments and armies against one another. Montrose was executed in 1650. Argyll was similarly rewarded in 1661, and here the story ends (until Volume 3) with the Clan once more imperilled by the crown.

The book is illustrated with maps and genealogies, and contains twenty pages of plates, four in colour. Two appendices deal with the substantial body of music associated with the Clan and the Campbell symbolic emblems.