A HISTORY OF CLAN CAMPBELL, VOLUME 1 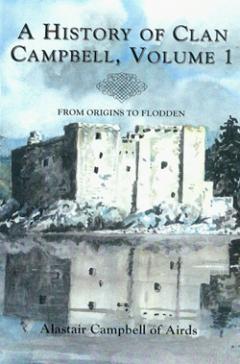 FROM ORIGINS TO FLODDEN

The Clan Campbell has long been among the largest of the Scottish highland clans as well as arguably the most powerful. Its history, apart from its intrinsic interest, is inseparable from the history of Scotland. This is the first of three volumes that will tell the full history of the clan in a depth never before attempted.

The book opens with an investigation of the myths and legends that surround the traditional accounts of the origin of the clan together with a description of the wild and beautiful land of Argyll in which they settled and built up their power-base. Although already of some substance elsewhere in Scotland, the Campbells had to work hard to establish themselves among more powerful neighbours. Chief among these were Somerled's descendants, the MacDougall Lords of Argyll by whom Sir Cailean Mor Campbell was slain at the String of Lorne in 1296.

When Sir Cailean Mor's cousin Robert the Bruce rewarded his loyal Campbell followers he set them on the road to success. The road was by no means a direct one: after the King's death his enemies regained much of the land he had transferred to the clan. But the Campbells were by now established as a counterweight to the increasingly wayward Lords of the Isles and over the years their loyalty to the Crown was rewarded by major grants of lands and offices. These allowed the clan to flourish and to extend itself over broad areas of Scotland. As this volume closes the House of Lochawe has emerged as the chiefly line while nearly all the major branches of the clan have become established, notably the Houses of Loudoun, Glenorchy (later Breadalbane) and Cawdor.

This volume ends with the defeat of the Scottish army at Flodden where the Campbell chief together with Campbell of Glenorchy and many of the leading Campbells fell alongside their King. The story of how the clan restored its position will be the subject of Volume 2.

The book is illustrated with seven maps, a genealogy, and twenty pages of plates of which four are in colour. Substantial appendices explain the structure of the clan and its septs and include a definitive account of the clan tartan.