Mrs. Mary Latham Norton, a.k.a. Mary Franklin Latham Norton, Mary Franklin Latham-Norton, and M. F. Latham-Norton, was appointed in 1927 by His Grace Niall Campbell, 10th Duke of Argyll and Chief of Clan Campbell, as Chairman for America to assist with the completion of the Campbell Memorial Belfry Tower, and in 1929, following perfecting of plans for a nationwide family association was elected as President of the Clan Campbell Association of America 1929 - 1947. She became a member of the D.A.R. joining Abigail Adams in Des Moines, Iowa in 1915, and organized Madame de Lafayette chapter, D.A.R. in California in 1920 and was it's Regent two years; 1922 through 1924 she was elected State Librarian, the first to serve in such an office in the California D.A.R., and for another two years, 1924 to 1926 was Press Chairman. Also press chairman for Fredonia chapter US daughters of 1812, 1924 through 1926. She became a member of Chapter V Colonial Dames of America and Honorary Member of Chapter VIII. Member of the Huguenot Society of South Carolina, and the Societe de l’Histoire du Protestantisme Francais, Paris; California Genealogical Society, Historical Society of East Tennessee, Albert Sidney Johnson Chapter No. 79 United Daughters of the Confederacy, the Huguenots Society Founders of Manakin, Virginia. She organized the Huguenot Society Founders of Manakin, in the Colony of Virginia, in 1922 and served as National President seven years, a successful regime. The Huguenot Society now has branches in eight States as of 2023. 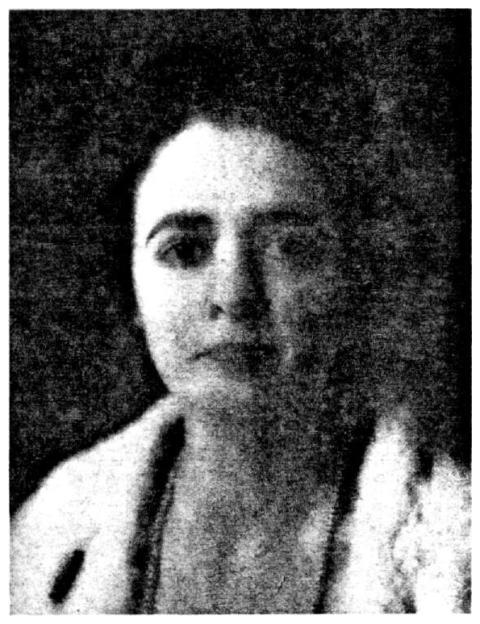 Her records for the Magna Carter Dames were approved on both the Campbell and the Luttrell- DeCourtenay families with a dozen claims, also her ancestor Hugh De Courtenay as a (first) Knight of the Garter, in England's most exclusive Order of ancestry.

She also became a member of the San Francisco branch of American Pen Women and served as Corresponding Secretary of that Branch, 1925 to 1927, author of the novel “The Rose of the Auzenburg” (1911) and short stories, and a new book “A Collection of Short Stories” which is dedicated to the Chief of Clan Campbell, the Duke of Argyll. It has been noted also that her Novel “The Rose of the Auzenburg” first published in New York, is almost an exact parallel with the greatest royal romance of all time, and was best described in the words of the Brooklyn (NY) Eagle: “The Rose of the Auzenburg” by Mary F. Latham Norton, is a story of the Balkan country strongly written and very interesting. The writer has put into it the atmosphere of social, martial, and diplomatic Court-life, and has enriched it with a romance native and wholly entrancing.”

Mrs. Norton is also an artist of some note, heraldry being her specialty.

She was born in Georgia, and is a descendant of Capt. James Campbell of Colonial Virginia, and also Campbell descent through Archibald Rhea II of Virginia and is descended from the Latham, Luttrell, and other Virginia families and the Houstons, Wilsons, and Fowlers of Georgia and South Carolina. Both of her grandfathers were officers in the Confederate Army. Maj. Horace H. Witt of Atlanta, 7th Georgia Regiment. and Capt. John Calhoun Latham of Gadsden, 49th Alabama Artillery. In 1928 Mrs. Norton was appointed Sponsor of Trans-Mississippi Division. United Confederate Veterans, General R. A. Miller commanding. and Matron-of-Honor on the Staff of the Commanding General, John C. Foster. In 1923, the Huguenot Society of Pennsylvania conferred on her their Huguenot cross with its pendant dove for her work on Huguenot records, and as National President of the Huguenot Society Founders of Manakin in the Colony of Virginia she was appointed on the Huguenot-Walloon Tercentenary Commission, of which Rev. John Baer Stoudt was Director. The Tercentenary was also commemorated by the United States Government in the issuing of a Huguenot Stamp and coining of a Huguenot-Walloon half-dollar. President Harding, the President of France, the Queen of Holland, and the King of the Belgians were honorary members of the Commission.

We are saddened to announce the August 10, 1978 death of Mrs. Mary Latham Norton, 87, of Vallejo CA. Mrs. Norton was founder and president of the Clan Campbell Association of America, which was active from the late 1920s through the early 1940s. Mrs. Norton had been in poor health for quite some time period she is survived by her son, Charles crane Norton the second of Vallejo, California with whom she had been making her home.

In her memory and appreciation of her many years of work for the Clan Campbell the Duke and Duchess of Argyll and the Clan Campbell Society (USA) both sent floral sprays for the services. Flowers were also sent by the “Huguenot Society, Founders of Manikin in the Colony of Virginia”, another organization founded by Mrs. Norton, in 1922. This society still exists, and is believed to have 3000 members.

Former members of the Clan Campbell Association, and descendants of others, have asked us from time to time about the Association, and especially about Mrs. Norton. In response to an appeal for information as to her whereabouts, we heard from Trustee Hugh P. Moore, who had been in touch with Mrs. Norton’s son, Charles. Mrs. Norton was quite ill at the time, and we have not been able to communicate with her because of her continued illness. However, Mr. Charles Norton has been most faithful in keeping us informed of his mother's condition.

In 1935, Mrs. Norton with her sister-in-law, Mrs. Maude Witt Latham who was National Secretary for the Clan Campbell Association, and Charles Norton, who was also active in the Association (he headed the National Nominating Committee in 1936 ) made a nationwide trip by car to visit many members of the Association. That's how most of them met her, including some of our present Clan Campbell Society, U.S.A. members who remember and who have spoken of that visit.

Mrs Norton led a full, productive life, which is best described by reprinting the following articles: The announcement of her death in the Vallejo Times Herald dated Sept. 1, 1978, and an article which appeared in the 1942 in THE HIGHLANDER, and the magazine of the Clan Campbell Association. (No connection with the present publication by the same name.) The Duke of Argyll, to whom THE HIGHLANDER refers was Niall Campbell, 10th Duke of Argyll.

Mary Latham Norton, 87, died Wednesday in a local hospital after a long illness. A native of Georgia, she had been a longtime resident of Vallejo. She is survived by her son, Charles C. Norton of Ohio.

Mrs. Norton was a feature writer for major newspapers in Des Moines, IA and Denver Co. She was the first society editor for the Vallejo Evening Chronicle in 1920. She was an author, artist, and wrote many songs including “Down Dixie Way” and “Always My Love”.

She was active in club work being the organizer and 1st Regent of Mme. Adrienne de Lafayette Chapter of the DAR, founder and president of the Huguenot Society and longtime Chief (President) of Clan Campbell Association of America.

[“Down Dixie Way,” a song written by Mary Latham Norton, was presented by Eugene C. Stryker, of Danville (VA). This song was accepted by England’s Queen Elizabeth II for her personal library in Buckingham Palace and is played daily by a military band at the Houston Hemisfair.  Farmville Herald, Volume 79, Number 3, 27 September 1968]

In memory and appreciation for her many years of work for Clan Campbell, our Clan Campbell Society (USA) has contributed a marker for the grave of Mrs. Mary Latham Norton, who died August 30, 1978.

Mrs. Norton, with the encouragement of Niall Campbell, 10th Duke of Argyll, founded the Clan Campbell Association of America in 1927. That Association remained active until shortly after the end of World War Two. Several members of our present clan Campbell society USA were members of the old Association, and new Mrs. Norton well.

Mrs. Norton was an amazing woman of many talents, and was the founder and the inspiration behind several other organizations during her busy lifetime. Her son, Charles Crane Norton, II, who worked closely with her in many of her pursuits, was kind enough to keep us informed of his mother's condition during her last illness, and it was he who sent us the accompanying photo of the marker, which has now been placed at her grave. For more details of Mrs. Norton’s outstanding accomplishments, see the fall 1978 edition of the Clan Campbell JOURNAL. 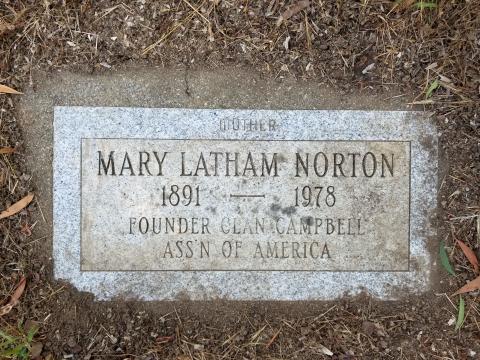