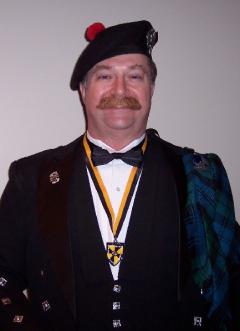 Randy Seale, the son of four generations of railroad men, was born in Birmingham, AL and grew up in Pensacola, FL. He holds degrees in History; Economics; and in Education. His graduate study included Operations Management, Finance, Economics, and Information Technology. His professional career has included positions as Director of Operations, Sales Management, and various I.T. Management positions. He is currently the eCommerce Manager for a laboratory supply company.

As a youngster Randy became aware of his Scottish heritage from his Campbell grandmother, wore his first kilt in high school and is actively involved in the Scottish Community. After starting as the “Assistant” Deputy Commissioner for South Alabama; he quickly earned a reputation as one of the strongest recruiters in Region 6 while working with Clan Campbell Society legend Clyde "Bill" Campbell.

In 2004, Randy was appointed Internet and Technology Committee Chairman. In the first year, he was able to increase the number of visitors to the Clan Campbell Society web site a hundredfold to over 30,000 visitors a month, and make the website the number one search return for “Clan Campbell” on the Internet. In 2009 the Clan Campbell Society website moved into the top 1% of all websites in the world, in terms of web traffic, and it has remained there ever since.

In 2006 Randy was again awarded the Clan Campbell Society’s Clansman of the Year for his work on the Society web site, his modernizing work as Business Manager for the Journal of the Clan Campbell Society (NA), and his work in establishing and maintaining communications with Society members in the devastated Gulf Coast areas of Hurricane Katrina. At the AGM presentation ceremony, CCS(NA) President Tommy Thomson was quoted as saying, “Randy’s dedication to the success of our Society is unsurpassed.”

In November 2006, Randy proposed a new theory that The Campbell Name had a medical origin. In it, he noted that other historic figures of the period also had the nickname "Wry-Mouth" and along with surviving artwork of those men, indicated a medical condition called Torticollis which causes a curved or twisted facial condition said to be the basis of the "Cam Beul" name. This theory has gained widespread acceptance as the origin of the Campbell name.

In 2006 and 2007 Randy developed the relationship with the Scottish Flag Trust (Scotland) and produced the Athelstaneford Saltire Flag Project for the Clan Campbell Education Foundation making flags flown at the A.D. 832 birthplace of the Scotland’s National flag available for the first time. Randy has been a long-time member of the Board of Directors for the Clan Campbell Education Foundation and has been a member of various committees (Finance, Membership, Journal, Scholarship, etc.) for both the Society and the Foundation. After serving as the Alabama Deputy Commissioner, the Alabama Commissioner and the Region 6 Deputy Commissioner, in January 2009 he was appointed the Region 6 Commissioner.

Randy co-hosted the 2002 Annual General Meeting (AGM) in Nashville, TN and has hosted two CCSNA/CCEF Executive Meetings, 2007 in Gulf Port, MS (which CCS(NA) President Tommy Thomson called, "...the best Executive Meeting ever..") and 2010 in Mobile, AL. The year of Snowmageddon in North America.

Randy is knowledgeable in the fields of Scottish Highland Dress, Scottish history, Scottish Heraldry, and is a third generation genealogist in his family tracing his British roots in America to 1607 Jamestown, VA. He has been a speaker at public schools, Historic Societies, and Boy Scout Troops on Scottish Dress, Scottish History and genealogy. He has appeared numerous times on television, radio and in print promoting the Scottish Community. He has been published in the Scottish community press and has been a regular quarterly contributor to the Journal since 2001. He has been a regular Highland Games Tent Manager and attendee since the early 1990's. When asked how many Highland Games he has attended, Randy laughs and says, “I stopped counting when I hit 100 games!” 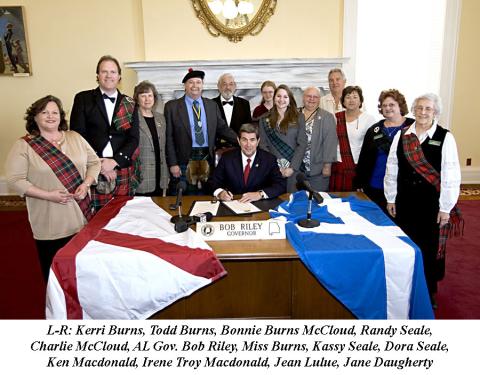 Since joining the Scottish Society of Mobile he has served as a Board member, Vice-President four times and President three times. He has developed relationships across the central Gulf Coast with the Baldwin County Strawberry Festival, the Mississippi Highlands and Islands Association, the Pensacola Highland Games (FL), drafted the updated Bylaws, designed the Alabama State Tartan, and authored both the Alabama State Tartan Day and the Alabama Scottish Heritage Month Proclamations which were signed by Alabama Governor Bob Riley on March 21, 2008. He has served multiple times as the Master of Ceremonies for the SSOM Robert Burns Supper and various Kirkin’ o’ the Tartans services. Randy received the Scottish Society of Mobile’s 2007 President’s Award for Distinguished Service. 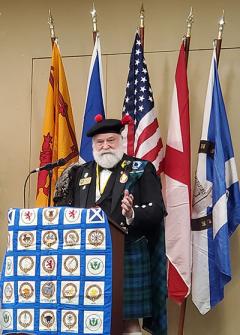 In 2009 Randy organized the first Scottish Gaelic Language Lecture in South Alabama with Mr. Lewis MacKinnon, then the Executive Director of Gaelic Affairs for the Province of Nova Scotia. (Mr. McKinnon was named Poet Laureate of Scotland in 2011). In 2009 the Mobile Association of Sages & Savants and the SSOM presented the joint program, “An Evening of Scottish Poetry” in which Randy was a featured presenter. In 2011 he organized the first ever Scottish Fiddle Concert in Mobile, AL. Internationally known performers Celtic fiddler Ed Pearlman and his son, pianist Neil Pearlman, headlined the concert. It was a sold out, standing room only event, bringing world class Scottish fiddle music and Scottish Step dancing to the Alabama Gulf Coast.

"The Honor is to Serve"