“The Godfather of the Clan Campbell Society (NA)”

In this issue, you’ll find a piece that I feel is significant to this theme and which I hope to be able to continue. This is the piece on Clyde "Bill" Campbell. Often in the Journal you will find many pieces on Campbells from our past that have made significant contributions to our proud heritage. Well, there are also many Campbells in our own time who have made significant contributions as well…and they’re still making them! Clyde Bill is one of those people. He literally wrote the book on recruiting new members; I do mean literally! I have a copy of it! (I’m pretty sure you can have a copy too if you want one.) In fact, as the Region 6 Commissioner, he holds training sessions for the deputies on how to recruit new members and run a tent.

To call Clyde Bill a “mover and a shaker” is an understatement of magnanimous proportions. He has a wonderful sense of who he is and where he’s going. His devilish smile and playful sense of humor make him a delight to work with and for! To use slang, “He’s just cool!” I have had the great honor of spending an evening in his home with his wife, Paula and several other CCSNA folks. Believe me when I say it would take weeks just to admire the photos he has taken all over the world. (He and his daughter, Ruth have actually had shows!) Just be careful ladies, he gets his hugs! 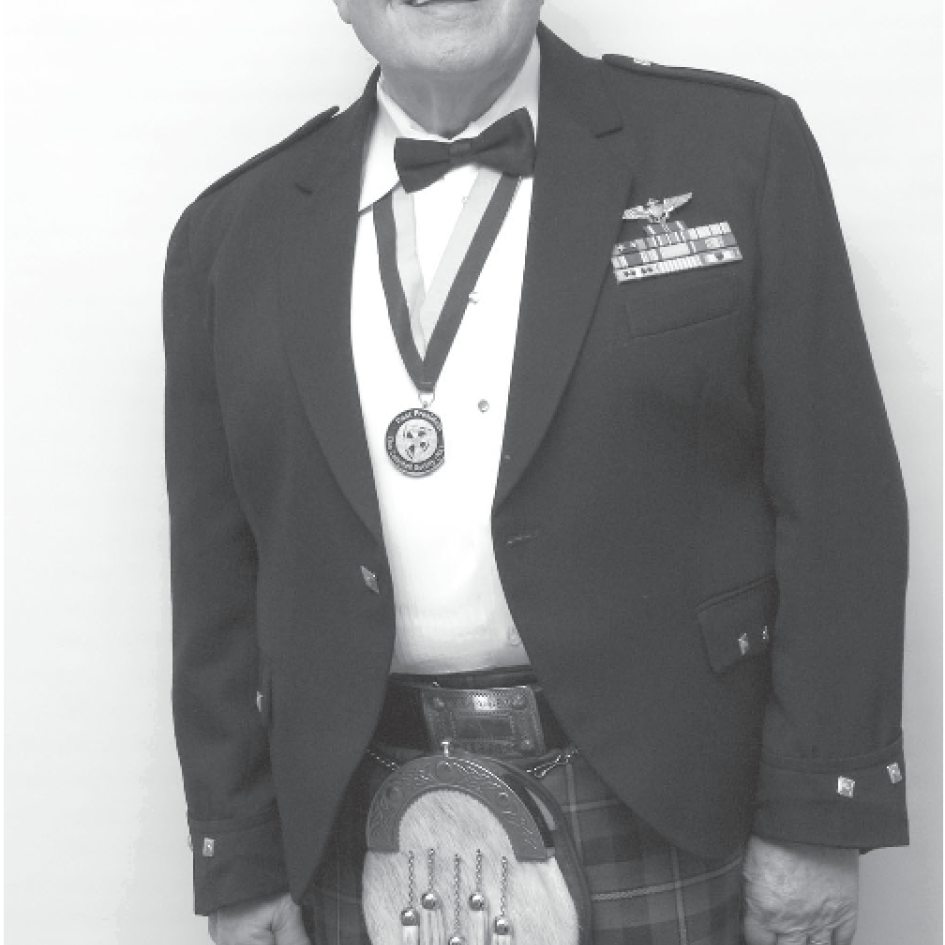 For those of you who know him, it won’t surprise you in the least to know that Clyde Bill Campbell was a state commissioner before he was a member of the Clan Campbell Society. With the exception of a couple of leaves of absences during which he was either President or Vice President of the Society, he has remained a commissioner for the last 28 years. The roster of Clyde Bill’s recruits reads like a ‘Who’s Who’ list of the Clan Campbell Society. For those of you who don’t know him, let me tell you a little more about him.

Long before Indiana Jones took his name from a beloved family pet, Clyde Bill’s family had already done it! As the story was told to this writer, Clyde Bill was actually nick-named after his grandfather’s dog, Old Bill. Apparently, wherever Grandpa went, Old Bill followed. Well, once young Clyde Henson Campbell was born...and began to toddle...he, too, followed Grandpa wherever he went. People would say, “Well, there’s Old Bill and Young Bill!” and the name stuck!

Clyde Bill got his start (literally) on the 22nd of June 1924, in a log cabin near Cumberland Mountain, one of seven children born to this family of pioneers in Tennessee. He had what he calls an “uneventful but hard-working childhood,” some of the finest times being in the autumn when his father would take him hunting after small game in the woods. He was educated at the two room public grade school and high school in Tracy City and upon graduation in 1942 he joined what he still calls ‘’The Federal Navy” at the outbreak of WWII.

Having decided to make a career of the Navy, he was accepted into a 5-term program at the University of Mississippi for officers who had not attended the Naval Academy. During his time there, Clyde Bill met a pretty young pharmacy student named Paula Hammond. In Paula’s own words, “Bill was a Navy Pilot so he was busy piloting planes as well as studying for graduation. He thinks that he is smarter than I am because he was graduating from Ole Miss 15 minutes before I did!! The Rat!!” (Clyde Bill also beat every other man in the Navy in completion of the program. ..with a degree in Physics, no less!)

After graduation, Bill went to Paula’s parents’ home in Gilbert, Louisiana, to visit before he went to San Diego. There, he found out that he was going to China and he didn’t want to go by himself! One long distance proposal later and the newlyweds were off to the Far East, but ended up staying in San Diego. (According to Paula, the plan was to have “two wee boys” then a break, and “two wee girls”...in true Campbell fashion, they had 3 boys before the oldest was 3 1/2 and then a girl 12 years later!)

For twenty years Clyde Bill flew as a pilot in the Navy all over the globe. He flew in WWII and in Korea and counts himself fortunate to have retired before the Viet Nam conflict.

His many accomplishments include:

He then used his engineering training from the Navy, physics from Ole Miss and Naval Post Graduate School in Monterey, to find work in industry. He spent over eight years with Reynolds Metals until he moved to Martin Industries. He held various positions including Plant Manager of one of the manufacturing plants and several corporate responsibilities including Director of Quality Assurance, Corporate Facilities Engineer, and Project Engineer for Manufacturing.

When asked about his beginnings in CCSNA, he had this to say, “You can never imagine how I got involved with CCS. In 1978 while visiting Inveraray Castle I ran across a membership application for the CCS Scotland. Knowing very little about Clan Campbell and nothing about a US organization I brought a copy home and prepared to fill it out. At about the same time my son, John, ran into the President of CCSUSA, James “Captain Jim” Campbell and found out a lot about our CCS. I immediately called Captain Jim and told him that I wanted to be a member and might be useful sometime. He replied, “Tomorrow I’ll send you a membership application and I’m hereby appointing you as Commissioner for Alabama.” So I was actually a commissioner before I became a member! And except for leaves of absence while I was Vice President and President, I have been a commissioner for 28 years. I made a half hearted effort to retire several years ago, but nobody paid the slightest attention.”

Since retirement from industry Clyde Bill Campbell has been very active as an industrial consultant. In the 1960s and 1970s he served as a Scout Master and there are four eagle Scouts in his family including Bill and Paula’s three sons and a “German-son” exchange student who became the world’s first and only non-US Eagle Scout while he lived with their family. Other exchange students who have enjoyed the hospitality of the Campbell home have come from Holland, Brazil, New Zealand, South Africa and Scotland. One of the last exchange students they hosted was actually the child of one of the first they hosted!

Today, in addition to his work for the Clan Campbell Society, Clyde Bill is an active ‘’Shriner” (a branch of the Masons) and is faithful in his “Scottish Rite” Masonic Lodge. The “Shriners” are a service organization. He is a member of the Sheffield Rotary Club (another service organization) where he has attended meetings regularly for 47 years. When unable to attend in Sheffield, he has been able to attend a similar meeting elsewhere and has attended Rotary meetings all over the world. Clyde Bill Campbell’s service to Rotary has been devoted almost entirely to youth activities. He organized an “Interact Club,” a service club sponsored by Rotary International, at Sheffield High School in 1967 and has been their advisor ever since. He organized a “Rotaract Club” at UNA (University of North Alabama) in 1970 and at Shoals Community College in 1988. He also served as Chairman of the Rotary District Youth Activities Committee for several years as well as a year as Governor of his Rotary District which has 54 clubs.

Clyde Bill and his daughter Ruth are both keen photographers and have combined to have a father-daughter photographic exhibition at the Florence Arts Center which was ‘’held-over” at least twice, a unique event for the Center. Clyde Bill got his first camera at the tender age of 14 and has been fascinated with pictures ever since. Though he’s never studied formally, he was once a member of the Photographic Society of America.

With his roots springing from a log cabin on the side of Cumberland Mountain in Tennessee, Clyde Bill’s way of operating was more down-home and personal than any of his predecessors within CCSNA. Perhaps as a result, he managed to steer the change from a US Society into the North American Society, which was being promoted by Canadians, with quiet skill and freedom from any major misunderstandings.

Clyde Bill has a philosophy of keeping people calm and could quietly defuse those who, for some reason got hot-under-the-collar. He believes that in a family organization, conflicts should be kept to a minimum and yet the right to free expression should be protected. The Society members owe much gratitude to Clyde ‘’Bill” Campbell and his wife Paula for their extraordinary dedication to the responsibilities involved in the offices Clyde Bill has held.