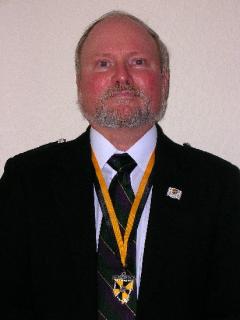 I was born in 1956 in Topeka, Kansas, where my father was stationed in the U.S. Air Force. Three months later we moved back to our home state of Florida, where I grew up in the small, historic harbor town of Port St. Joe, situated on the Gulf of Mexico. Florida's constitution was signed there and the town was destroyed three times in the 1800's: by fire, by flood and by yellow fever, as described in the historical novel, The Great Tide, by Rubylea Hall. My father's family were pioneers in the area, as my mother's (Campbell) side, which family lore holds emigrated from the Isle of Skye in the late 1700's, were pioneers elsewhere in northwest Florida. I became interested in my Scots heritage early on and read and reread the historical sketches of our clan in Grandfather Campbell's 1950 edition of The Clans and Tartans of Scotland, by Robert Bain, one of the few such books that depicts the authorized Campbell tartans. I still have the book.

I achieved a BA in English at Berry College, Georgia, in 1978 and an MA in German at the University of Georgia in 1983. Matrimony brought me to Bakersfield, California, and I got a job with county social services, where I have worked for 21 years, picking up a Master of Social Work degree in 1994 upon the realization that it looked like I was going to be a social worker when I grew up. I am currently the administrator of the county shelter for abused and neglected children. My wife, Kathleen, has been a medical laboratory scientist at Mercy Hospital for 31 years. Kathy has two sons, of whom I am enormously proud: Philip is a petty officer first class on a fast-attack submarine and Gregory is working on a doctorate in physics at UC Irvine.

In 1989 I went to the San Francisco Caledonian Games where I met Hugh Moore, the late High Commissioner of Clan Campbell, who personally took me to a kiltmaker to ensure I purchased the correct tartan. I joined the Clan Campbell Society (NA) and have been a life member since 1994. In 1995 I met the 12th Duke of Argyll and his lovely Duchess at the 125th Games of the Caledonian Club of San Francisco. I made a few heartfelt remarks at a talk about the "Campbell Country" video that had just come out and Dick Campbell immediately recognized me as his successor to the Central California commissionership. Kathy and I took a coach tour of Scotland and while the rest of the tourists went to the sacred Isle of Iona, we enjoyed a private tour of northern Argyll in the charming company of Alastair Lorne Campbell of Airds. When he asked if I thought a definitive history of our clan would be well received, I replied enthusiastically "Yes!" When the time came, I became a patron of his History; I have been overwhelmed by his astonishing opus. Kathy and I are returning to Scotland this summer and plan to attend the Inveraray Highland Games on July 18th.

Currently CCS(NA) President, Carl still man's the tent at five Highland Games from Ventura to Pleasanton, California. Kathy is a real trooper and is almost always with me. I do my best to serve the Society and our clan with energy and integrity. Carl's term as CCSNA President ended in October 2020. He continues to serve as CCSNA Region 10 Commissioner and on the CCEF Board of Directors.