Innis Chonnel (pronounced; Inch CONnel) Castle, also known as Ardchonnel Castle, was one of the earliest Campbell strongholds, certainly from as early as 1308 until the present day. 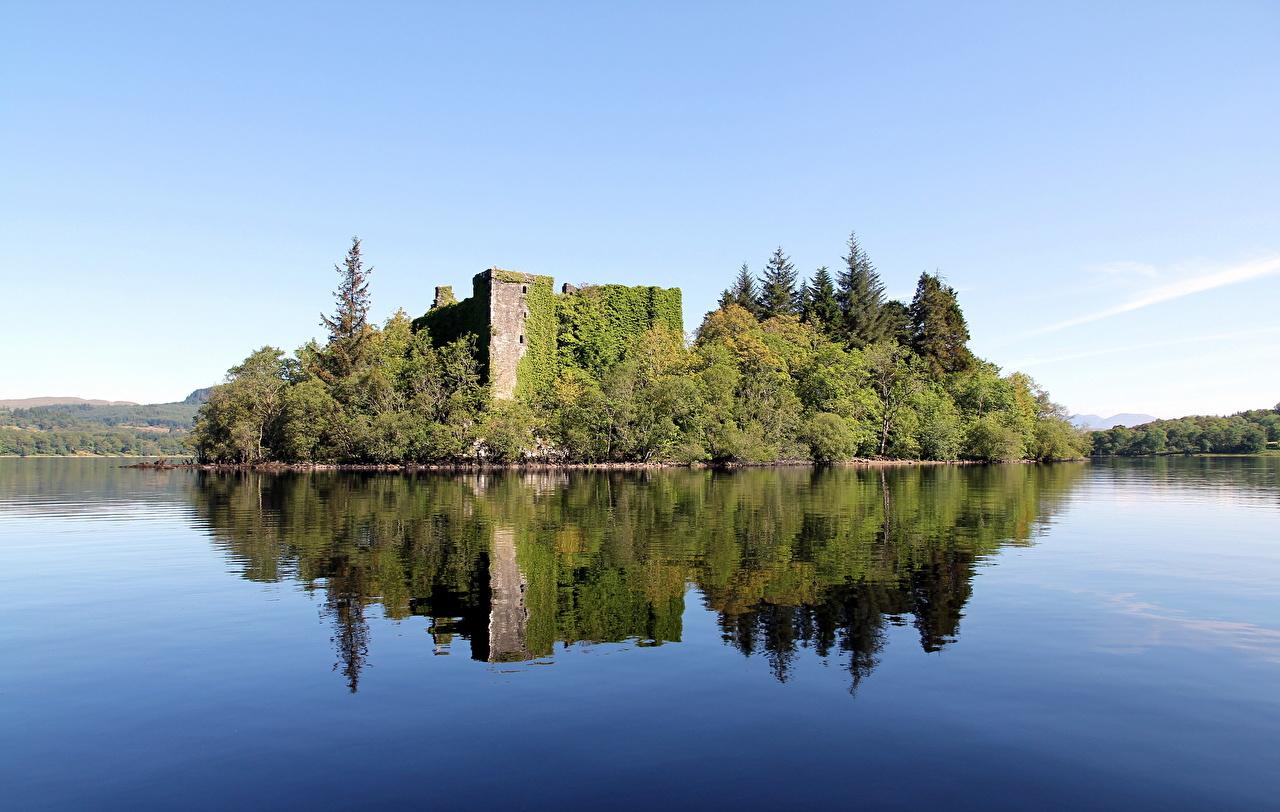 The massive walls of Innis Chonnel crown the rocky southwestern end of a small island half way down the eastern shore of Lochawe. The island and the adjacent shore are now heavily wooded, as they would not have been in the time when the castle was occupied. The trees screen the view of the island from the road and also screen the view of the castle down the loch from the north. The island runs northeast to southwest and is less than an hundred yards from shore.

In the first half of the 13th century a square defensive structure of high stone walls about eight feet thick was built on solid rock on the southwestern end of the island. The wall enclosed a courtyard and had one or more square towers at the angles. In Norman fashion these were of very shallow projection and mainly served as reinforcing buttresses to the corners which faced the northwestern end of the island, the direction most vulnerable of attack. Within the enclosed courtyard, lean-to buildings of wood and thatch originally lined the walls, as at Castle Sween.

The construction of Innis Chonnel at about the same time as Dunstaffnage castle is significant in the history of Argyll. There is no way to tell which was built first, although Dunstaffnage is larger and possibly more sophisticated, leaving open the possibility that it may have been slightly later. However the size may merely have been determined by the outcroppings of rock upon which each castle was built. There is some evidence that the same masons may have worked on both, the arrow-slit windows having very similar details and angles.

Innis Chonnel was originally laid out on a plan similar to that of Castle Sween which had been built 100 to 150 years earlier. At Dunstaffnage the rock platform was larger, allowing a more spacious courtyard, and the sharper corners dictated by the more triangular plan made necessary the round corner towers, a more refined element of design which was not used in the original plans at Castle Sween or Innis Chonnel.

For the first 150 to 200 years after construction, Innis Chonnel appears to have remained much as it was when first built. During the first half of the 15th century, most likely in the time of Duncan, first Lord Campbell, the whole castle was fundamentally remodelled.

The one existing stone building standing out from the original walls into the courtyard at the eastern corner was altered at ground level to provide a new adjacent gateway and was also extended upwards to provide more accommodation. A new tower was constructed at the southern corner and outside the original walls. Along the full length of the southwest side of the courtyard a new range was built with vaulted cellars and store rooms on the ground level and a spacious Great Hall above, likely with a roof of timber trusses. At one end the Hall adjoined a Chamber in the southern tower, and at the other, a pantry and Kitchen. Access was by an outside stair in the western corner of the courtyard. A hatch in the floor of the chamber gave access to a dungeon. The Hall had a gallery over the pantry or `screens'. Heating for the Hall appears to have been by a central hearth as there is no evidence of a fireplace such as is found in the Kitchen and Chamber.

Northeast of the castle and outside the main entrance door, there is a `middle bailey' or open entrance court which is similar in size to the plan of the castle itself. Beyond are the ruins of a Gatehouse, outside of which the defensive walls of the `outer bailey' can still be discerned, skirting an oval plateau now clothed in trees.

The survey of the Royal Commission on Ancient Monuments reports: "The castle has little recorded history. It was probably built by a founding member of the Campbell family on Loch Awe, of whose origins little is known prior to the appearance of Sir Colin (Mor) Campbell at the end of the 13th century. The castle itself was first specifically mentioned in October 1308, when it was being held by John of Lorne on behalf of Edward II (of England), but it was almost certainly one of three MacDougall castles mentioned, but not named, by John in a well-known letter written to Edward probably in the Spring of the same year."

"Following the defeat of the MacDougalls, the Lordship of Loch Awe reverted to the Campbells, being confirmed in free barony to Sir Colin Campbell, son of Sir Neil Campbell, by Robert I (the Bruce) in 1315. Thereafter Innis Chonnel seems to have remained the chief stronghold of the family until the time of Colin Campbell, 1st Earl of Argyll (1453-93), who made Inveraray his principle residence."

Despite the conclusion by historian David Sellar that the Cambels were `great territorial lords' by the end of the 13th century, the question has been raised as to whether it was the ancestors of the Lochawe Cambels or the MacDougall Lords of Lorne who first built Innis Chonnel. The construction of such a massive fortification clearly required extensive resources.

The Cambel Lordship of Lochawe is said to have been based upon the northwestern shore of the loch about Kilchrenan. However their hosting-ground, presumably an indication of their earliest establishment, was on a point jutting into the western shore of the loch immediately opposite Innis Chonnel at Cruachan Lochawe. This place gave rise to the clan war cry "Cruachan!".

The relationship between the early Cambel ancestors and the (MacDougall) Lords of Argyll may well have been amicable initially. The killing of Sir Cailein Mor in 1296 may only have been the initiation of conflict. Certainly, as has been mentioned, the castle was in the hands of the MacDougalls by 1308, but whether it came into their hands following the death of Sir Cailein Mor at their hands in 1296 or was already in their possession is not clear.

There is some evidence that Fraoch Eilean castle at the northern end of Lochawe was a royal initiative started in 1250-75. Had the Cambel ancestors had such backing for the construction of Innis Chonnel, the resources needed could more easily have been found.

Sir Duncan Campbell who was Sir Cailein Mor's great-great-great-grandson and the 1st Earl's grandfather, was no doubt responsible for the extensive reconstruction and additions to the castle. He was raised to the peerage as first Lord Campbell in 1445 and died in 1453.

During the following two centuries, the Earls used Innis Chonnel as a place of confinement for political and criminal prisoners. The earliest recorded Captain was of the family of the MacArthurs of Tirevadich, but from 1613 the privilege passed to the Lorne MacLachlans. They survived until the early years of the present century when they still owned Craigenterve.

The castle is still owned privately by the Argyll family and is not open to the public. However it can be viewed from the shore road along the east side of the loch.