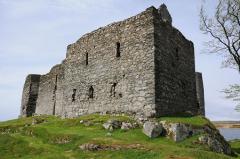 Castle Sween (pronounced; Castle SWEEN) stands guarding the mouth of Loch Sween and set upon a low rocky point beside a sand beach facing south. The low ground between the site and the hills leaves the castle highly visible to those farther up Loch Sween. The view southwest from the castle looks past nearby islands and down the Sound of Jura towards Ireland, the ancestral home of the builder. The strand would have been convenient for beaching galleys, there being no natural anchorage nearby.

The original castle appears to have been built in about 1100 to 1150 and is one of the earliest stone castles in western Scotland. Four massive walls surround a courtyard which was originally lined with lean-to structures, probably of wood and thatch. The walls are strengthened at the angles and in the center of each side with broad buttresses in the Norman style. In the middle of the south wall, the entrance gate is an arched opening in a ten foot thick section of masonry.

Later, at some time in the 13th century, the northeast corner of the courtyard was opened up and a three-story Hallhouse built in the form of a great squat corner tower. The lower floor contains the remains of a kitchen and bake-house. The Hall itself was presumably on the second floor, set on a wooden floor and with a timber beamed roof.

The western wall of the courtyard was set upon a low cliff above the sea. Shortly before the castle passed into the hands of the Earl of Argyll in the late 15th century, this was broken out and a round tower, known as the MacMillan tower, was built at the northwest corner. Adjacent to the round tower and in the courtyard to the south, a new rectangular building would seem to have been added at about the same date, perhaps as a barracks.

The early history and siting of the castle have much to do with the emphasis upon sea power which still dominated western Argyll in the twelfth century, a legacy of the Norse invaders.

In about 1100 and Irish prince of the O'Neill royal line established himself in western Argyll where he founded the families of Lamont, Gilchrist and MacLachlan among others. One of his sons, Suibhne, was probably the builder of Castle Sween. (Note, `bh' is sounded as a soft `v' in the Gaelic). In the 13th century the MacSween lands extended as far as Lochawe in the north and Skipness in the south. The family would appear to have joined with the MacDougall Lords of Lorne against Robert the Bruce, for, following his accession to the throne of Scots, he granted Castle Sween to his loyal supporter Angus (MacDonald) of Islay.

Dugal, son of `Syfyn', granted lands in Knapdale to Sir John of Menteith, and Castle Sween was among the Knapdale properties granted by John of Menteith to Sir Archibald Campbell of Lochawe, father of Colin Iongantach, in charters dated 1353.

How long this period of Campbell influence lasted is not clear, for some authorities believe that title of the castle had passed to the Lords of the Isles and was held by them until the forfeiture of John Earl of Ross and Lord of the Isles in 1475. During the century and a half of their tenure, the castellans were first MacNeills and later MacMillans.

After a decent interval in royal hands, the castle was granted to Colin, first Earl of Argyll by James IV in 1490. Duncan Campbell, younger brother of Dougall Campbell of Auchinbreck and great-grandson of Duncan first Lord Campbell, was Captain of Castle Sween in 1546. He was killed at the battle of Glenlivet in 1594 and was succeeded in Castle Sween by his son Duncan whose son Dougald became the first baronet of Auchinbreck. The castle was attacked and burned in 1644 by Alasdair MacColla and his Irish of Clan Donald during his vindictive ravaging of Argyll in the Civil War. Like most places which enjoyed the attention of MacColla, it has been a ruin ever since. The Department of the Environment are now the custodians and the castle is open to the public.