Earl of Loudoun, named after Loudoun in Ayrshire, is a title in the Peerage of Scotland. It was created in 1633 for John Campbell, 2nd Lord Campbell of Loudoun, along with the subsidiary title Lord Tarrinzean and Mauchline. The 1st Earl's wife Margaret was the granddaughter and heiress of Hugh Campbell, who had been created Lord Campbell of Loudoun; he resigned the peerage in favour of his grandson-in-law, who was later created an earl.

Campbells of Loudoun are the oldest branch of the house of Argyll, and are descended from Sir Donald Campbell, forth son of Sir Colin Campbell, 1st Lord of Lochaw, and brother of Sir Neil Campbell, 2nd Lord of Lochow, the friend of King Robert I Bruce. The title is derived from the barony in Ayrshire, was originally the possession of the Loudouns of Loudoun, one of the oldest families in Scotland. Margaret of Loudoun, the heiress of the estate, married Sir Reginald Crawford, High Sheriff of Ayr, and was the grandmother of Sir William Wallace, the famous Scottish patriot. The barony passed to the Campbells in the reign of King Robert (the Bruce) by the marriage of Sir Duncan, son of Donald Campbell, to Susanne Crawford, heiress of Loudoun, and fifth in descent from Sir Reginald Crawford. Sir Hugh Campbell, Sheriff of Ayr, was created a Lord of Parliament by the title of Lord Campbell of Loudoun, by James VI., in 1601. His granddaughter, Margaret Campbell, who inherited his title and estates, married Sir John Campbell of Lawers, a descendant of the Campbells of Glenorchy, later known as the Campbell of Breadalbane family.

The 6th Countess married the 2nd Earl of Moira, who was later created Marquess of Hastings. The next three Earls also held that Marquessate. However, with the death of the 4th Marquess, the Marquessate became extinct, but the Earldom passed to the elder daughter of the 2nd Marquess.

The heir apparent to the Earldom uses the courtesy title Lord Mauchline. 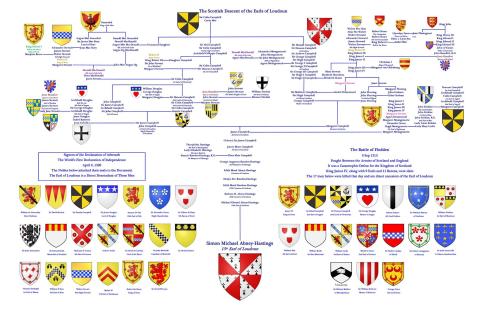 The Earl of Loudoun's Titles

1st son and heir of Sir James Campbell of Lawers, by his wife Hon Jean Colville, 3rd daughter by his first wife of James Colville, 1st Lord Colville of Culross

created: 12 May 1633 Earl of Loudoun, and Lord Tarrinzean and Mauchline, to him and his male heirs for ever

note: The resignation of the Lordship of Campbell of Loudoun in his favour c. 1619 seems to have been accepted some time after 25 Jan 1622/3 ; Chancellor of University of St Andrews 1638-61/2; a supporter of the Covenanters and one of their representative in England 1640; Lord Chancellor of Scotland 1641-60; First Commissioner of the Scottish Treasury 1641-44; President of the Privy Council S ; sent to treat with King Charles in 1645 and 1647; President of the Scottish Parliament 1648; fought at the Battle of Dunbar 1650

note: Entered the Army 1727; a Representative Peer for Scotland 1734-82; Grand Master of the English Freemasons 1736-37; Governor of Stirling Castle 1741-63 and of Edinburgh Castle 1763-82; ADC to the King 1743-45; raised a regiment of Highlanders 1745, a quarter of whom were captured en masse by the Jacobites at the Battle of Prestonpans, though in response he captured Lord Lovat, one of the Jacobite leaders; in 1746 his forces were defeated by Prince Charles Edward on Dornoch Firth; Col of the 3rd Regiment of Foot 1749-70; Maj General 1755; Colonel-in-Chief of the 60th Regiment of Rifles (Royal Americans) 1755-57; Governor-General of Virginia and Commander-in-Chief of the Forces in America 1756-57; Lieut General 1758; Commander-in-Chief of the troops sent to Portugal against Spain 1762; General 1770; Col of the 3rd Regiment of Foot Guards 1770-82

note: Assumed the additional name of Mure before that of Campbell on succeeding his mother in the estates of his maternal grandmother 1729; Captain of the Scot's Greys 1745; Member of Parliament (Whig) for Ayrshire 1754-61; Lt Col of the 2nd Dragoon Guards and later the 21st Dragoon Guards 1757-63; Maj General 1781

Note: The Earldom of Loudoun was held by the Marquesses of Hastings from 8 Jan 1840 until 10 Nov 1868, when on the death without issue of Henry Weysford Charles Plantagenet Rawdon-Hastings, 4th Marquess of Hastings, 9th Earl of Loudoun, etc., the Marquessate of Hastings and other non-Scottish titles created by patent became extinct, the English baronies by writ fell into abeyance between his four sisters, and the Earldom of Loudoun, etc., passed to his eldest sister.

note: On 6 Nov 1871 the abeyances of the Baronies of Botreaux, Hungerford, de Moleyns and Hastings of Hastings were terminated by Letters Patent in her favour

note: Succeeded his father 24 Jul 1895 as 2nd Baron Donington; on his death he was suc. in the United Kingdom Barony of Donington by his youngest brother, Gilbert Theophilus Clifton Abney-Hastings later Clifton-Hastings-Campbell, 3rd Baron Donington, and the English Baronies of Botreaux, Hungerford, de Moleyns and Hastings of Hastings fell into abeyance between the three surviving daughters of his late younger brother, Maj Hon Paulyn Francis Cuthbert Abney-Hastings

note: On 17 Dec 1920 she was declared by a resolution of The House of Lords to be along with her two sisters a co-heir to the Baronies of Botreaux, Hungerford, de Moleyns, Hastings of Hastings and Hastings of Hungerford, as well as those of Strange of Knockyn and Stanley;  on 23 Feb 1921 the abeyances of the Baronies of Botreaux, Stanley and Hastings of Hastings were terminated in her favour, but on her death in 1960 they once again fell into abeyance between her five daughters

only child by first husband

succeeded by: son by first husband

2. Hon Marcus William Abney-Hastings, Master of Loudoun, heir presumptive to the Earldom of Loudoun (b. 1981)

The heir presumptive to the Earldom of Loudoun is Hon Marcus William Abney-Hastings, Master of Loudoun, second son of the 14th Earl of Loudoun and younger brother of the present Earl.

THE EARLDOM of LOUDOUN 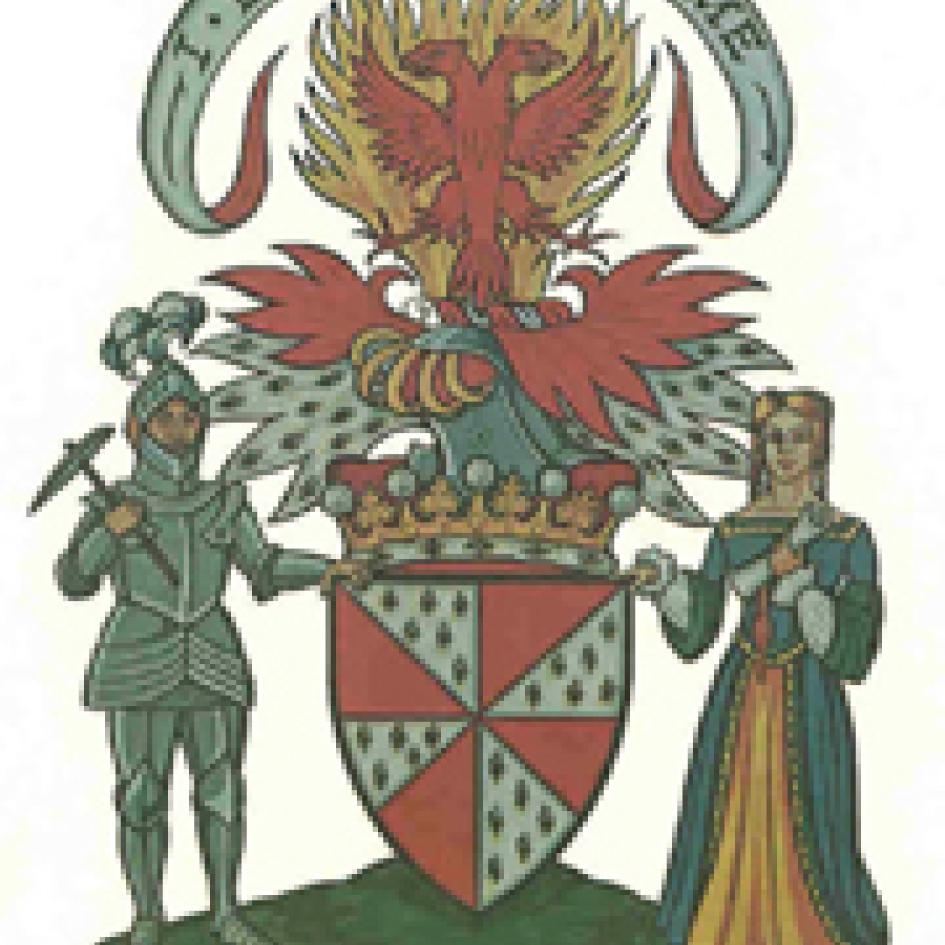 Arms of the Earldom while bearing the surname "Campbell". 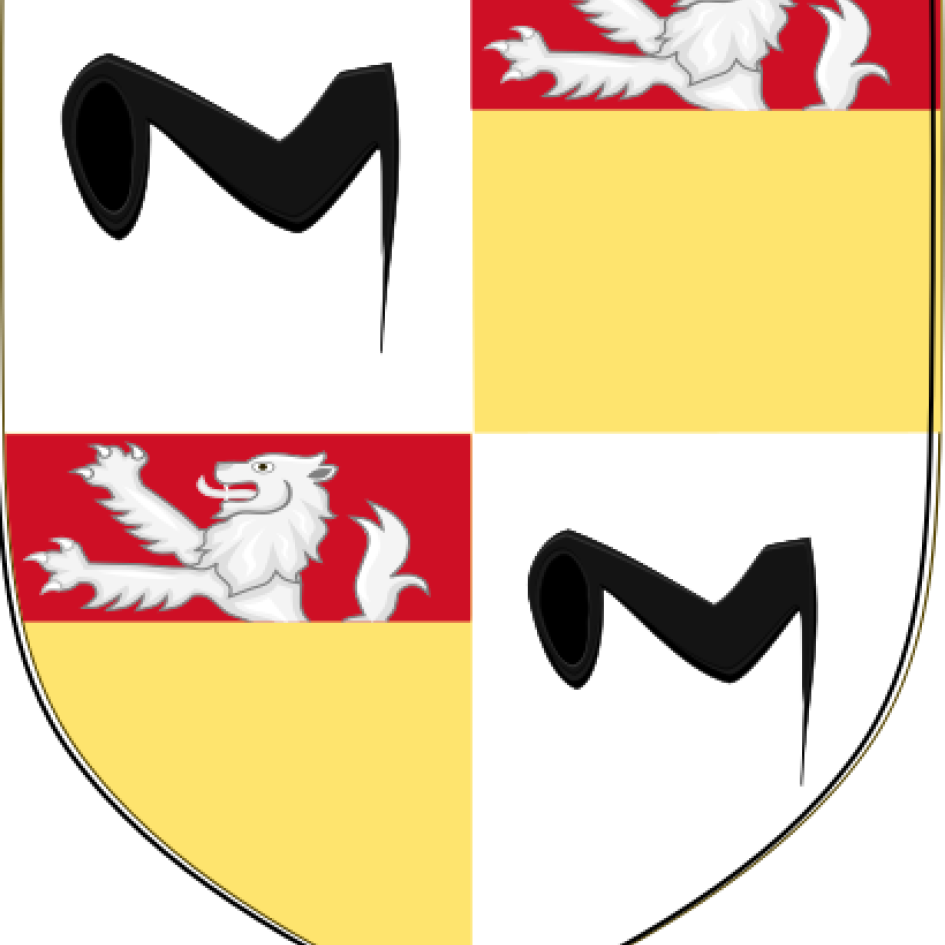 Arms of the Earl of Loundoun bearing the surname "Abney-Hastings"

Dexter:  An Armed Man bearing a Pick on his shoulder proper;  Sinister:  A Lady richly attired with a Signet Letter in her sinister hand proper

I Bide My Time