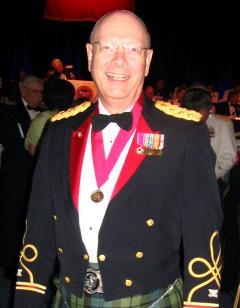 Born in Chattanooga, TN, Barton has spent over half his life in Virginia, He is a Class of 1962 engineering graduate of Princeton University. Commissioned in Field Artillery in the Army, he served 30 years in a combination of active duty, National Guard, and Army Reserves, retiring as a full US Army Colonel (USAR). His decorations include the Legion of Merit, the Meritorious Medal with 3 Oak Leaf Clusters, and the Army Commendation Ribbon. His military career included two tours at the Pentagon. He is a graduate of the Command and General Staff College, and holds an advanced degree in strategic studies from the Army War College. He is a past National Vice President Army, Reserve Officers Association of the United States (ROAUSA).

Barton retired with a distinguished career as an Senior Manager at Reynolds Metals Company overseeing product marketing and sales.

Barton was Executive Director for the Museum of the Confederacy for two years (2002-2004). Barton is a past Director of Membership Marketing of the U.S. Army Reserve Officers Association, and was the Director of Membership Marketing Museum of the Confederacy. Barton Campbell also brings to the position a lifetime of interest in American and Scottish history and is a well-known and sought-after speaker on the War Between the States, Confederate military topics, and U.S. Southern history. Barton Campbell has twice been awarded the Valley Forge Freedom Medal by the Freedom Foundation. He currently serves on several National and International Committees.

He is currently serving on the Board of Directors of the Olford Ministries International and is a member of a variety of military and historical organizations, including the Sons of Confederate Veterans, the Reserve Officers Association of the United States, and the Sons of the American Revolution.

He has two great-grandfathers who held commissions and fought in the Confederate Army. Barton is the son of the late Capt. James H. Campbell, USN who was president of Clan Campbell Society (USA) 1978-81. Barton has held numerous positions with the CCS(NA) over the past 28 years. He served as a Trustee on the CCS(NA) Executive Council, and a Director for the Clan Campbell Education Foundation.

He is a Past Commanders (2014-2016), and currently the Nominating Committee Chairman for the Society of the Order of the Southern Cross.

He and his wife Madge belong to the Presbyterian Church in America, where he is a trustee. They are also very active in Gideons International. Married for over 49 years, they have a son who is a judge, and married, with three daughters, two of which are twins, and a daughter who is married to an active Army doctor, also with two girls -- all granddaughters... so far.