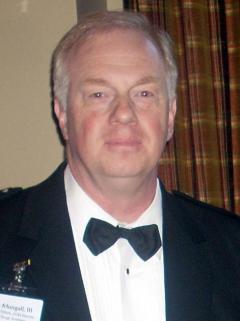 Tom's Scottish cultural interests are varied and include Scottish history, dance, music. He has written articles on Scottish Highland Attire and has a keen interest in Scottish breeds of dogs. He and his wife Catherine own three Yorkshire Terriers, two Cairn Terriers and a Border Terrier. One of Tom and Catherine's favorite activites is dancing. They especially enjoy jitterbug, ballroom, Irish Ceili step-dancing, Scottish Country dancing and Vintage (18th & 19th Century dancing. They dance with the Scottish Country Dance Groups in Baton Rouge and New Orleans and also belong to the Louisiane Vintage Dancers.

Tom is a vocational rehabilitation counselor in private practice, specializing in Vocational Assessments, Vocational Testing, Career Counseling, Job Placement/Search Assistance, Life Care planning, Disability Cost Analysis, Labor Market Surveys, Maritime Evaluations, Social Security Disability Vocational Expert Consultation, Forensic Consultation and Expert Witness services. He has been in the business of counseling and vocational rehabilitation since 1984 and have been under contract with the Social Security Administration, Office of Hearings and Appeals since 1987. He has been the President of The Louisiana Association of Rehabilitation Professionals in 1994 as well as "Member of the Year" of LARP in 1992.

Tom has a Master of Education Degree in Counseling from Georgia State University, December 17, 1983. Also, a Bachelor of Science Degree from Georgia State University with a major in Psychology, March 28, 1982. As part of his job, he testifies as an expert witness in many courts of law, both state and federal throughout Louisiana and Texas. He is also a Fair Hearing Officer for Louisiana State Rehabilitation Services.