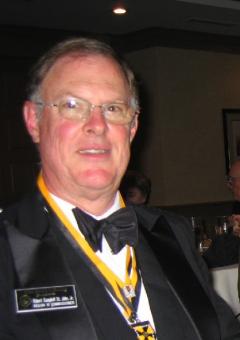 I joined Clan Campbell Society (NA) in March, 1999, at the urging of Dr. Fred Campbell; we spent quite a bit of time talking about the Society over the years (1994 – 2000); Dr. Fred was my FAA flight medical examiner while working for American Airlines. I began my service to Clan Campbell Society as the commissioner for Region 12 when Florida became its own region. We have a very full schedule of events starting in January and ending in May (about fifteen games). I was subsequently elected to serve as a trustee, and have served the last three years as your Vice President. I am honored by the nomination to serve as President, and promise to serve you to the best of my ability over the next three years.

I earned a BA Economics in college; and while in the U. S. Air Force, I earned an MA in Business Administration. During my Air Force career, I flew trainer and transport aircraft, served as a staff officer for the Military Airlift Command in New Jersey and Germany, and finished my career as a staff officer for U. S. Central Command at MacDill AFB in Tampa Florida. I retired November 1, 1988 with the rank of Lt. Colonel.

After retiring, I began a career with American Airlines, flying from New York City throughout the country as a pilot on Boeing 727s. I transferred to Miami in 1993 so I could fly to international destinations. I retired from American Airlines on January 1, 2001 to begin my third career – full time grandparent. 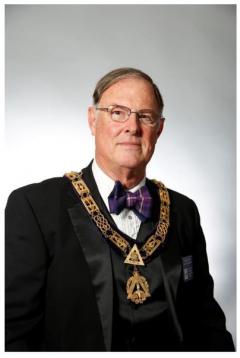 Robert has also been active in the Masons with a long a distinguished record culminating as Grand Council Royal & Select Master of Florida, Most Illustrious Grand Master from 2017-2018.

My wife Sharen and I have, been married for over 50 years and have lived in Tampa since 1985. We have enjoyed taking care of four of our seven grandchildren over the last twelve years. We are rapidly approaching the end of our daycare career; the youngest grandchild in Tampa will enter kindergarten in August of 2009. We have three children, two daughters who live within 15 minutes of us, and a son, daughter-in-law, and youngest granddaughter who now live in the mid-west.

“I am approaching the end of my second term as Society President and wish to continue to serve our organization. As the newest Past President, I plan to be at all Executive Council and events to lend my support to our new President. I can enhance that support as your Treasurer, by insuring all our financial transactions are handled in a timely and professional manner. I am fully acquainted with all our accounting programs and our on-line banking processes. I have ready access to Regions Bank if face-to-face matters arise. 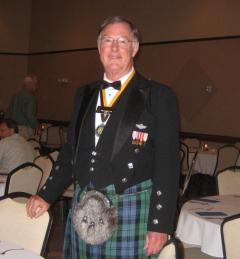 I have maintained close contact with our financial operations through both terms as President in an effort to insure timely payment of expenses and assist when necessary to handle credit card processing. I will do my best to support all our members as your Treasurer. I have an educational background in finance and feel fully qualified to perform these duties.”