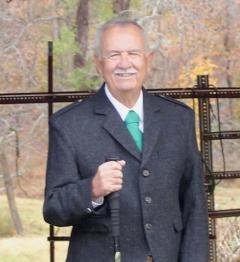 My mother always took time, while I was growing up, to mention my many local Campbell relatives when we were out and about. It was surprising to find that our butcher and grocer, as well as a great many folks we did business with were members of our extended Campbell family. My great grandfather, Murdoch Christian Campbell, (called Papa, by my mother) brought with him to Northwest Florida from the Ft Bragg area of North Carolina his extensive business enterprises and established his operation in an area very much like the land previously settled in North Carolina. The family, in addition to their homestead leased many other plots for their turpentine, sawmill, gristmill, store/post office and other ventures. Family lore mentions that a wee dram might have also been produced on a regular basis.

Most of my life has been spent as a small business owner in a small rural community in West Tennessee after retirement from 20 years Naval service. My early years were spent in the panhandle of Northwest Florida enjoying the beauty of the area, and its seafood bounty, before the place became the tourist draw of today. A wonderful time and place to be a youngster, free from worry and with neighbors to look after (and ready to tell on you for any infraction they might witness) your welfare. We spent our summers in and on the bayous, swimming, boating and enjoying a carefree time in the fifties. Mama had a rule that swimming was prohibited until May 1st every year so as the oldest of seven siblings, we all would slip off and grit our teeth and go for a swim, albeit short, on January first every year. Still unsure what that said about us as we, and most youngsters in that time pretty much walked the straight and narrow, obedient, path. There were many other activities too, church, school, Order of DeMolay, scouts, newspaper routes, as well as employment as a golf caddy at the local Air Force golf course and many other after school learning and earning experiences. Growing up in a small town of less than two thousand is highly recommended.

A slick talking Navy recruiter had me in the U S Navy in the late summer of 1959, thus beginning an adventure of travel and increasing responsibly until an ideal time and opportunity came 20 years later to retire as a Master Chief. My children were approaching junior high school and it was felt they had seen enough of the world and now was the time to allow them to plant roots in a small town and spend their time until adulthood with friends and classmates on a more permanent basis. That proved to be a wise choice as all three have become successful adults with great families and careers.

My interest in genealogy led me to the Clan Campbell Society. Later an opportunity to serve the CCEF as book guy three came up, eleven pallets of books, DVD's, CD's , coloring books, guides to the castle at Inveraray, etc. arrived at my home for storage and shipment to Campbell's all over the world. An interesting job and one enjoyed in service to our clan. Another service to the clan is Deputy Commissioner, Tennessee with the responsibility for the West Tennessee area. It has been a pleasure to work the games with the regional as well as the other state commissioners. My first tent experience was with the late Clyde Bill Campbell and he left me with the strong conviction that service to the clan at the games were very important to the survival of our work to promote things Scottish and keep the Campbell banner flying high in the future. There is room, and a welcome for you in all we do to spread the news of our heritage and history.