Flowers of the Forest: 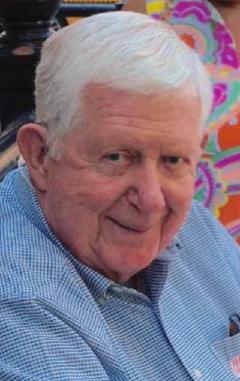 I was recently informed of the passing of my dear friend John Wendell Campbell by his daughter Amy. John died in his 90th year on May 26th, 2020 in Port Charlotte, Florida. His beautiful wife, Marilyn, had passed a few years earlier.

I first met John in July of 1978 at the Northern Virginia Scottish Games. Here was this tall red haired guy with a booming deep voice at the Clan Campbell tent. I would soon know and love him almost as a brother. He was a retired marine and I was still on active duty with the Air Force. We hit if off right away and signed up as members of the Society on that day.

The next year, again at the NVSG, as I was walking to the tent, I heard someone playing Happy Birthday to You on the bagpipes. I wondered how they knew it was my birthday only to find out that they were not playing for me, but for John. Lo and behold we were both born on the same day exactly 10 years apart. John did it up proud with a keg of beer for all to enjoy. (He did like his beer.) Little did I know that we would become close personal friends and devoted members of our namesake Society.

John and I were the instigators of a small group of likeminded Society members who liked to party. The group consisted of John & Marilyn, Ted & Nancy Brice, Phil & Lois Thompson, Bill & Wini Steadley, Donald D. & Beth Campbell, Duncan & Susan Campbell and Ann & I. We would get together two or three times a year and travel together to different games. We even stayed together in the same lodge at the Sugar Mountain Lodge at the Grandfather Mountain Games. Another big effort that John and I built together was the gathering of Campbells to march in the Annual Alexandria (VA) Christmas Walk. We routinely would have over 50 of us marching and dining together. (I left DC in ’81 but John continued to march with the Campbells in the Christmas walk until he and Marilyn move to Port Charlotte, FL).

It just so happened that, at that time, the leadership of the CCSNA was in the DC area. Soon John and I were on the Executive Committee of the Society, he moving to the treasurer position in 1980. Three years later, he became a trustee on the board. In 1984, I moved to complete the last six months of the term of Bill Steadley after his resignation as President and I asked John to act as my VP. John succeeded me as President of the Society that same year.

John inherited a Society in turmoil. At the time there was a lawsuit against the Society for over $200,000 which could have ruined us. In addition, the Society store was in dire need of an overhaul. John, along with the assistance of Hugh Moore, then High commissioner Journal of the Clan Campbell Society (North America) Vol. 47 No No 4 Fall 2020 47 of the CCSNA, successfully guided us through that quagmire and the lawsuit was dropped. John also solved the problem of the store except the joke was on me as the entire contents of the store wound up in my garage.

One of the humorous anecdotes I remember about John was at an AGM during John’s Presidency. It seems our banquet was served buffet style. The food was all set out but no one was eating. I said to John, “Why don’t you start it off?” To which he replied, “I can’t eat until all my troops are fed.” I said, “They are waiting for their President to eat first.” He was finally convinced to begin and we all finally got to eat. Once a Marine…

John joined me as my VP when I took over the reins of the Foundation (then the Association) in 1996 and he served until stepping down in 2005. This was about the time that he and Marilyn left their home in Fairfax, VA and moved to Port Charlotte, FL for a well-deserved retirement. From that time on we stayed in touch via telephone and email.

I admired John for his outstanding leadership, cogent ideas, flawless execution and can-do attitude and I especially appreciated his friendship. John loved his clan, the Society and the Foundation and dedicated a large part of his life to the betterment of them all and we are all enjoying the benefits of his efforts. John, I love you man… You are missed.

Following his childhood aspiration, he enlisted in the United States Marine Corp on his 17th birthday. During his distinguished 28-year career in the Marines, he served as an artillery officer in Okinawa and Vietnam. He taught at the United States Naval Academy and the Officers Candidate School in Quantico, Virginia, among numerous other assignments. After retiring in 1974, he joined Pacer Systems and later Mitre Systems as a defense contracting officer retiring in 1994.

Over the course of his career he received a Bachelor’s Degree from Syracuse University in Political Science, and Master’s Degrees from Temple University, American University and the University of Southern California.

Aside from his military career he was a multiple Virginia State Trap Shooting Champion and thrilled to introduce anyone to the joys of shooting. Lt. Col. Campbell served as the President of the Campbell Clan Society USA, contributed to the publication of a book on the history of the Campbell Clan and was a Life Member of the St. Andrews Society. Lt. Col. Campbell was full of life to his last days, always eager for the next adventure and a friend to many. His was predeceased by loving wife of 58 years, Marilyn (Rekers) Campbell.