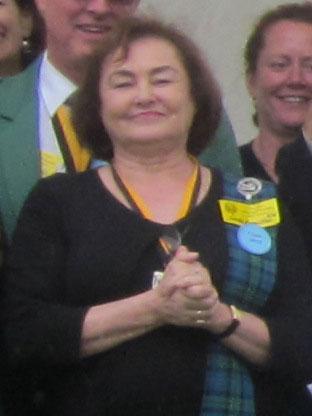 Linda Campbell Knowlton, CCSNA Trustee and New Hampshire Commissioner for Clan Campbell Society (above on the CCEF Scotland Tour in 2012) has been married to Bruce for 53 years.  They have  two children, and two grandchildren.   She was a military wife for many of those years. While in Germany, Linda was an accounting tech for the Army Air Force Exchange Service and then assumed a manager’s position for Waterford Crystal and Wedgwood China—a “fantastic position” for her.

Upon returning to the States, Linda began work for Four Season’s Hotels, first in Washington, D.C. and then in Boston.  She retired from the position in Boston and is currently living in Milton, NH.

Linda joined the Clan Society at the “home of Patrick Henry” in Scotchtown, VA, in 1994.  Bruce and she had been active in the Fredericksburg, VA, games and when her brother the late David Swain Campbell came to visit, Linda mentioned that Vermont needed a CCSNA Commissioner David volunteered.   When she moved up to New England Linda then took on the role she continues to have as NH Commissioner for Clan Campbell and represents the Society at the Loon Mountain (NH) Games.

Linda is a craftsperson of the highest caliber and markets her many Clan Campbell items at the games, having created many beautiful things woven from Campbell tartan.   Serving Region 1 for about 7 years, Linda donates 20% of any profits of sales to the region.

Linda is president of a women’s club in Milton, NH, and a member of the Milton Historical Society.  Her husband has just retired, and they look forward, when it is again possible, to travel as in the past to visit their grandchildren respectively in Colorado and Washington State.