Kilchurn Castle is the original castle of the Glenurchy and Breadalbane Campbells. The castle stands upon a low plateau of rock at the end of a level spit of marshy land which intrudes into the northeastern end of Lochawe. On the northwest side of the spit, the River Orchy enters the loch. The water level of the loch was originally higher, flooding the spit and forming an island upon which the castle stood. 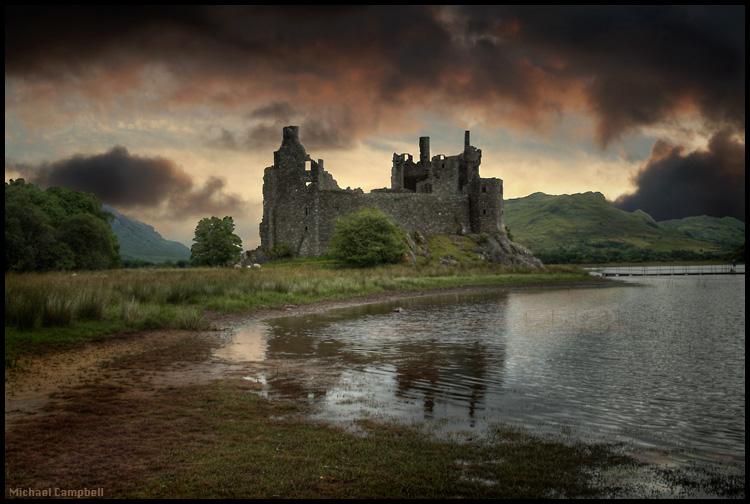 The plan of the castle is roughly rectangular with the width running southwest to northeast and with the southern corner cut off on a diagonal. The earliest surviving part is the keep or Tower House, the main part of which was built between 1440 and 1460 when the plateau was probably enclosed with a barmkin wall of which only the southern diagonal portion remains.

The tower stands in the eastern corner of the courtyard. The entrance was through the vaulted ground floor of the tower. Above was the Great Hall which had a wooden ceiling which would not have been as ornate as the later ceilings at Carnassarie. Above the hall were two more stories of rooms and a garret which gave onto a parapet walk.

Towards the turn of the 15th to 16th centuries a Laich Hall or large dining hall was built along the inside of the south diagonal wall of the courtyard with one end near the tower, no doubt because the Hall in the tower was too small for the retainers and guests of the family. About a century later a second storey was added to this hall. However, little now remains of the Laich Hall.

During the third quarter of the sixteenth century the tower parapet and roof-house were remodeled and circular corner turrets added. A further addition was made to the north side of the tower, evidently private chambers, but of this later work nothing identifiable remains. In 1616 the newly heightened Laich Hall was joined to the Tower House by a new range containing two vaulted cellars over which were a chapel and attic.

The final phase of construction was carried out by the first Earl of Breadalbane. Round towers were added to the north, south and west corners of the heightened barmkin wall and a range of barracks built along the northwest side and linked to the tower by an angle at the northeastern end. A new stair tower was added to provide more gracious access to the southwest side of the Tower House.

The castle seems to have been little used after it was garrisoned in the 1745 Jacobite rising. Evidently the tower was struck with lightening in the early 1770s after which no repairs were carried out to the roof and the fabric rapidly deteriorated. Some masonry repairs were crudely done after 1887 but these unfortunately destroyed or obliterated some original features. The masonry of the whole structure was re-pointed in recent years.

The lands of Glenorchy were originally in the hands of the MacGregors of Glenstrae and passed to the Campbells by marriage in the 14th century. Sir Duncan Campbell, the future Lord Campbell, granted the Lordship of Glenorchy to his younger son Colin in 1432. Colin of Glenorchy's father-in-law, John Stewart Lord of Lorne, signed a charter in 1449 `apud castrum de Glenurquhay' (at the castle of Glenorchy) so that by that date some form of castle had been built on the site, possibly in the form of the Tower House and barmkin.

Sir Colin's son, Sir Duncan, added the Laich Hall and his grandson, another Sir Colin (1550-1583), who had succeeded two elder brothers and so was 6th of Glenorchy, built four angle turrets and the north wing to the Tower House. The 3rd and 4th Lairds had died in the castle in 1523 and 1536, so it is clear that Kilchurn was the principal home of the Campbells of Glenorchy for about an hundred years.

Then, in the second half of the 16th century, the family increasingly lived at Fincharn on their Perthshire estates. Until Sir Duncan's violent feud with the MacGregors of Glenstrae in the first decade of the 17th century, there was a line of MacGregors appointed as Keepers of Kilchurn. Sir Duncan, who succeeded on his father's death in 1583, was made a Baronet in 1625 and died in 1631, having made fairly extensive improvements to the castle.

Besides building several other tower houses from Barcaldine to Balloch (now Taymouth), Sir Duncan `of the seven castles' put a second floor onto the Laich Hall at Kilchurn and joined it to the tower with a further range which included the chapel and stair to the courtyard.

The castle was briefly besieged in 1654 and was garrisoned by Sir John of Glenorchy, 1st Earl of Breadalbane, in support of the government action against the 9th Earl of Argyll's invasion of 1685. The barracks on the north side of the courtyard were added in the 1690s and used in 1708, 1715 and 1745.

The Campbell knights of Glenorchy who later became Earls and then Marquises of Breadalbane, expanded their estates eastwards into Strathtay, becoming for a time almost as powerful as the Earls and Dukes of Argyll. But towards the end of the 19th century a decline set in through gambling and poor management which has resulted in the loss of all the lands and the destitution of the family. Kilchurn was the last to go, sold in the 1980s to a romantic consortium after 500 years.

In recent years teak stairs have been installed to allow access to the upper levels of the tower, greatly increasing the interest of a visit and the range of views up Glenstrae and Glenorchy and across the loch to Cruachan. Kilchurn is in the care of the Department of the Environment and is open to the public in summer.