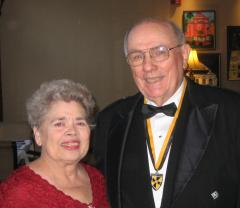 Kenn first became aware of the Clan Campbell Society in 1982. His wife Ruby was laid up for some time after crashing her car when a tie-rod broke, and someone gave her an old Highlander magazine which she found interesting. One thing she found was an advertisement from a local man, Bob Thompson, who sold Scottish things and she called him. It turned out that Bob was a Deputy Commissioner of the Clan Campbell Society and told her about the CCS and their planned trip to the 1983 Clan Campbell Gathering in Scotland. Kenn had visited Scotland the year before, but did not get to visit Inveraray so he wanted to go. He joined the Society, made the trip, and became an enthusiastic member of the Scottish community. The Inveraray Games of 1983 were the first highland games he ever attended.

In 1992 Louisiana Commissioner Jack Moore asked Kenn to replace him. It was a simple job at first as there were no games in Louisiana at that time. He just attended Scottish society meetings and kirkings with a pocketful of Clan Campbell Society brochures. Later Louisiana wound up with four games, which kept him pretty busy.

After he retired in 1997, he volunteered to help then Editor Diarmid A. Campbell, Esq. with the Journal. Diarmid was using the old cut and paste method still popular at the time. Diarmid would type up all the text, cut it up, cut out the graphics and photos and paste all the pieces onto an 11 x 17 layout sheet for the printer to photograph. It was a very tedious and time-consuming job. Kenn had become familiar with desktop publishing programs at his work and knew it would save a lot of time and effort. So beginning with the Spring 1997 issue, Diarmid would send the text, pictures and graphics to Kenn who would then, in a first for a Scottish clan society, lay it out with Adobe PageMaker. Kenn retired as Journal Production Manager in 2017 and was recognized by the Clan Campbell Society Board of Trustees as Journal Production Manager Emeritus for his two decades of service.

In 2007 Kenn received the Clan Campbell Society (North America)'s President's Award for Meritorious Service for his years of service not only as a Commissioner, but also for his tireless work with the Journal.

Upon graduating from Baton Rouge High School, Kenn enrolled at Louisiana State University where he earned degrees of BSARE (Architecture) and BSCE (Civil Engineering). After service in the U.S. Navy, as an officer in the Civil Engineering Corps, he returned to Baton Rouge in 1956 where he practiced architecture and structural engineering until retirement in 1997. He was a member of the American Institute of Architects and served a term as President of the Baton Rouge Chapter. He was also a member and director of the Louisiana Architects Association.

He is a member of the Caledonian Society of Baton Rouge, Saint Andrew Society, and the American Camellia Society. He is an award-winning collector and breeder of camellias with over 200 varieties in his garden.

He is married to Clan Campbell Society (NA) Genealogist and Librarian Ruby G. Campbell, PhD. (better known to many CCS(NA) members as “Dr. Ruby”). They have two children, Karen and Neil, and a grandson Colin MacNeil Campbell.