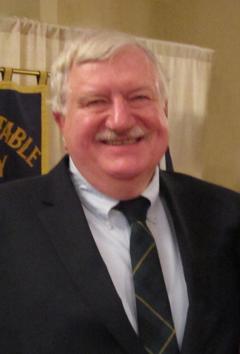 Jay lives with his wife, Kathleen Conley Higle, and his adult daughter, Mary Campbell Alexandra Higle, in Melrose, NY.  Jay and Kathy are retired.  Jay was a policy analyst with the New York State Department of Transportation, where his duties included administering the $752mm annual State Transit Operating Assistance program for New York City’s subway and bus system.  He was responsible overseeing the Metropolitan Transportation Administration’s Strategic Operating Plan and was relationship manager for the planning portion of the DOT’s State Planning and Research Program.  A Clarkson graduate, Jay has 15 hours of graduate study in strategic management and leading organizational change beyond his second masters (MS Transportation; MPA).

Although his wife of fifty years is from an Ulster Sept of the MacDonalds, she has been known to offer pro bono advice to Clan Campbell.  She has an MBA from Columbia University, a CPA with a big eight partnership, and 20 years’ experience in financial management of not-for-profits.  She took the IRS’s course in Not-for-Profit Accounting several times.  (It is an annually updated course).  Campbell teaches at the Hoosac School, an Episcopal Preparatory School.  She has a BA & MA from ‘The College of the Holy and Undivided Trinity of Queen Elizabeth near Dublin’.  As a rising sophister (third year student) she was Senior (fourth year student) Censor (communications officer) of the Hist: The Historical Debate Society. This is the oldest debate club in the world.  Here’s a note to networking, every President of Ireland was a member of the Hist; it grew out of a debate club organized by Sir Edmund Burke, MP.  Campbell’s  graduate study included a year of Experimental Archeology.

“I learned about the Clan Campbell Society from my friends Jim Burns and the late Hugh Campbell, but in truth, I began learning about Clan Campbell at about the age of four or five, from “Nellie” Ellen Campbell-Lang Higle, my grandmother. She taught me who I was: an American, a Scott, a Highlander, and Campbell of Breadalbane. Her mother, Grannie Lang, put an edge on the lessons. A Campbell, she married a Lang, but never forgot who she – or I – was.

They used to say “She was a Campbell”. My father told me she once stopped him in his mother’s living room as he sang the tune “Bonnie Dundee”. She reprimanded him sharply, and told him never to sing that tune again! Interesting, her brother-in-law, Charles, served in the Greys in South Africa and France. The first time I was in Inveraray my Great Uncle Bill took me to the old Argyle Arms for a traditional….

Jay is Commissioner of the Melrose Fire District  (they are building a fire house); a Trustee of the Hoosac School (they are building a new girl’s dorm); and program chairman of the St. Andrew’s Society of Albany (1803) which last fall held a program and reception on ‘Alexander Hamilton, Life and Legacy’ in partnership with the Albany Institute of History and Art, and some other stuff.  Jay notes that before retirement he did some other interesting stuff, and since retirement he has done some more interesting stuff.  He has given up drinking Isla of Jura since learning of the Prophesy.  He tries to follow Campbell of Breadalbane’s sept motto:  ‘Follow Me’!