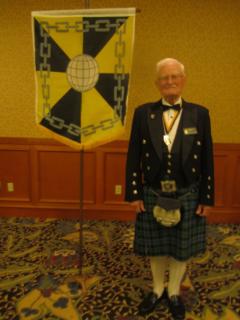 I have been a member of Clan Campbell since 1994. My Mom is my connection to Clan Campbell although my father's side of the family is also Scottish. My Dad's Mom was born in Glasgow and her husband, my grandfather, was born in Northern Ireland of Scottish parents. So I am Scottish through and through.

After a couple of years I became editor of the NY State Clan Newsletter which I did for several years. My next assignment was a Tent Manager at the Long Island Old Westbury Games. I did this for about 15 years. In the meantime, I also was appointed NY State Commissioner in 2002 and held that position until my wife Pat passed away in 2017 and I moved to Florida.

I have attended all AGM's since 1994, and was elected to the CCSNA Board of Directors in 2018.

I was born in The Bronx, NY and lived there until I married my bride Patricia in 1953 and moved to Brooklyn. After nine years in Brooklyn, we purchased a house on Long Island where we raised 7 children. I have 24 Grandchildren and 21 Great grandchildren.

I became a New Your City Police officer in 1959 rising to the rank of Lieutenant, retiring in 1980, after 21 years of service. I then started a second career with a Supermarket chain consisting of 48 stores on Long Island. I rose in ranks and attained the position of Director of Risk Management. I retired from that position in 2001.

I squeezed in a College Education along the way and graduated from State University of New York's Empire State Collage with a degree in Police Administration.

As to Military Service I spent nine years in the NY National Guard from 1948 to 1957, with active duty in 1951 attaining the rank of Master Sgt.