Dunstaffnage Castle (pronounced; DunSTAFnidge, the AF as in trAFfic) guards the entrance to Loch Etive and the Lynn of Lorne from a rocky point sheltering a small bay which once offered anchorage and a beach for galleys. Built on the level top of a natural platform of conglomerate rock, the walls are extensions of the cliffs which fall sheer to the greensward on all sides. Of all the castles in Argyll, this has likely seen the most stirring events of history. 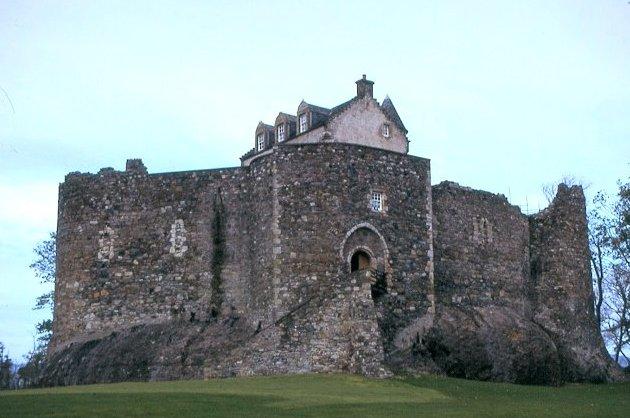 The presence of a castle built so close to the MacDougall stronghold of Dunollie but built by the same family seems curious. However when it is understood that Dunollie, as it stands today, was only built by the chiefly line of the Clan Dougall after Dunstaffnage had passed to the Stewart Lords of Lorne, this can be understood.

The high walls of the original 13th century fortification ring the plateau with masonry over ten feet thick and crowned by a continuous walkway. There are towers to the north, east and west and a rounded bulge in the wall to the south. The west tower now contains the late 16th century gatehouse, the only section still roofed, which was originally remodelled shortly after the castle came into the hands of the Argyll family in 1470.

Towards the end of the 16th century, another phase of rebuilding took place when alterations were undertaken to the gatehouse and the whole northwest courtyard range of buildings was constructed in place of an older, less elaborate structure on the same site.

The castle dates from the first quarter of the 13th century when it was probably built either by Duncan MacDougall, Lord of Lorne, or by his son Ewen who died before 1275. The family would hold Dunstaffnage for only 80 to 90 years before losing it to Robert the Bruce in 1308 who later installed a Constable, Sir Arthur Cambel ancestor of Strachur.

In 1308 Robert the Bruce had defeated the MacDougalls at the Pass of Brander and subsequently rewarded his Campbell and MacDonald allies with many of the Clan Dougall lands. Sir Arthur Cambel, a senior first cousin of Sir Neill of Lochawe, was granted the Constableship in 1321-22. However after his death and by 1338, many of their former lands in Lorne were re-granted to the MacDougalls, including Dunstaffnage.

Possibly the grandson of the Ewen or John MacDougall who had escaped to the English court after the battle of the Pass of Brander returned to Scotland in the train of the English princess who was to marry David II King of Scots, and so found royal favor. However he had no son but two daughters and, rather than leave the castle to his less cosmopolitan MacDougall cousins, he left the Lordship to his heiresses, both of whom married Stewarts, one becoming Lord of Lorne and owning Dunstaffnage.

On the murder of John, the second Stewart Lord of Lorne, in 1463 by a renegade MacDougall in the pay of the English, the Lordship and castle passed to his brother Sir Walter. There was a dispute, since the murdered man was on his way to be married to his mistress so as to legitimate his natural son. Local sympathy seemingly favored the boy and for six years there was conflict in Lorne. Sir Walter, perhaps finding the lands more trouble than they were worth, exchanged the Lordship with Colin Earl of Argyll for richer and more peaceful lands in eastern Scotland. The exchange was ratified by royal charter in 1470.

This acquisition of the Lordship of Lorne by the Earl of Argyll was a most notable event in the history of Argyll and in the fortunes of Clan Campbell. Apart from the very strategic castle of Dunstaffnage, the charter of the lands of Lorne provided better westward and northward sea-access from landlocked Lochawe and more fertile valleys for oats and grazing than were offered by the rocky shores of Lochawe.

The castle of Dunstaffnage has remained in Campbell hands for over five hundred years. The Campbells of Dunstaffnage lived in the castle until a disastrous fire in 1810. However most of the historic belongings of the family were saved, only to be lost in another fire at Dunstaffnage House before the Second World War. The castle is the seat of the Campbell Captains of Dunstaffnage who are hereditary Captains of the Castle for the Earls and Dukes of Argyll. The Captain spends one night each year in the Gatehouse as symbolic occupancy. The structure is in the care of the Department of the Environment and is open to the public.

The 13th century chapel can be found in the woods to the west of the castle and is also worth a visit. The last Stewart Lord of Lorne is said to have died on the threshold while reciting his marriage vows.