David made his first visit to Inveraray Castle, the seat of Clan Campbell, with his grandmother in 1960. This is when he purchased his first Campbell kilt — which he then wore on all important occasions both at high school and college. He joined the Clan Campbell Society (N.A.) in 1981, and he, his wife Peggy and their two daughters (Allison and Meredith) participated in the 1983 Clan Campbell Society (N.A.) trip to Scotland. David was asked to fill in as Society Secretary in 2003 and accompanied then Society President Ed Cattell to Scotland to give the new Chief, His Grace Torquhil Ian Campbell, XIII Duke of Argyll, the Society’s gift of a silver clan cap badge. He was elected to his first term as Secretary in 2004, a post he held until 2011. In April 2011, David was elected Vice President. 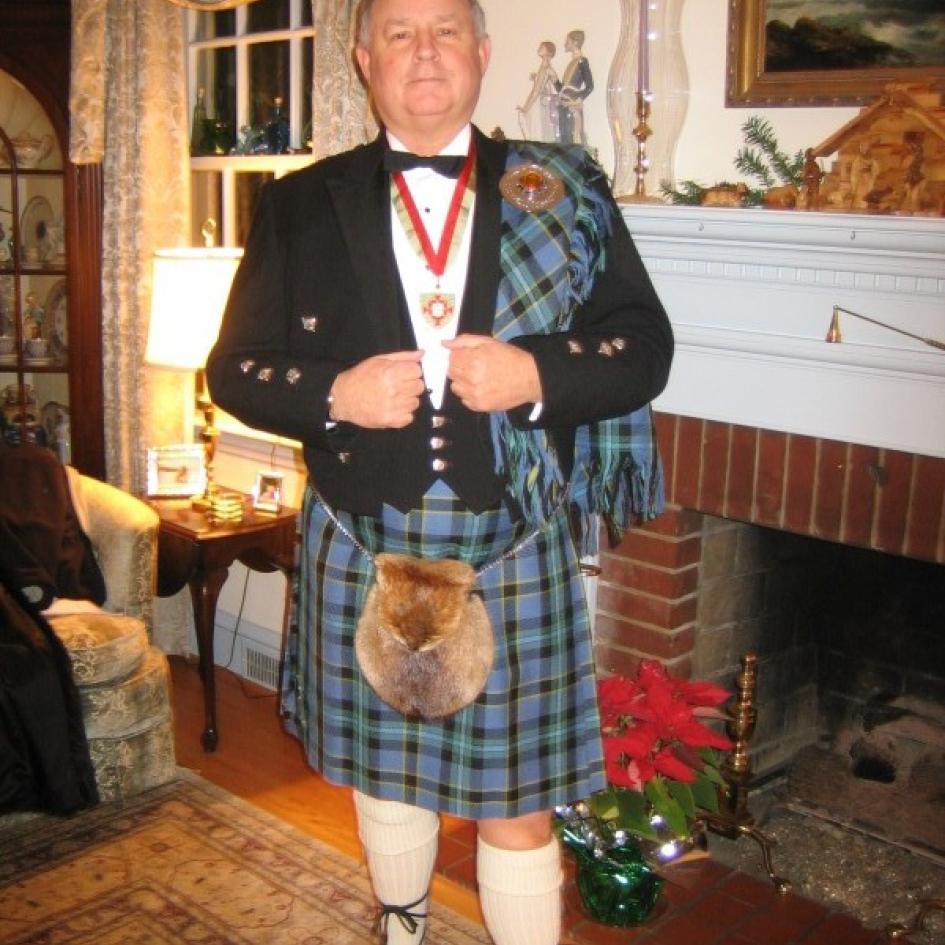 In 2010 he was asked by Society President Robert Campbell St. John, Jr. to serve as his Special Assistant for Operations to review and revitalize the lines of communication within the Society. David also volunteered to edit and publish the Society’s new email NEWSLETTER. David hosted the successful Philadelphia AGM in September 2009, and with great pride hosted His Grace the Duke of Argyll in his hometown of “Quaker” colonial Haddonfield, New Jersey (est. 1681). David regularly contributes articles and book reviews to the Journal of the Clan Campbell Society (North America) and was chosen “Clansman of the Year” in 2010. He regularly mans the Clan Campbell Society (N.A.) tent at the Fair Hill (MD) games, where more than a dozen Campbell kinsmen greet the public each year, and supports at other games. He recruited his brother, sister, and five cousins to join the Society. He recruited a State Commissioner for Delaware and Deputy Commissioners for Southern New Jersey and Eastern Pennsylvania. He also enjoys the support in Scottish events of his son, Patrick, a fellow member of the St. Andrew’s Society of Philadelphia.

In 2011 with his son Patrick he pioneered, then organized and led the 2012 Campbell tour to Scotland (and will lead the second CCEF tour in July 2014) and will host the AGM in Charlotte, NC in April 2014.

David graduated cum laude from Dartmouth College, Hanover, NH, in 1966 and did graduate work at the University of London School of Oriental and African Studies (West African area studies) and a second masters (1994, in liberal studies) from Widener University in Chester, PA. He is a member of Phi Kappa Psi fraternity. David taught in the Camden City, New Jersey public schools for 32 years and honorably retired in 2001. He was his city and county “Teacher of the Year” in 1995, and a runner-up for New Jersey State teacher of the year. David teaches the Friday Morning Bible study and a Christian heritage adult Sunday school class at the First Presbyterian Church of Haddonfield, New Jersey. He is both an ordained Elder and Deacon, and Chairs the Adult Christian Education Subcommittee.

Among other community activities, David is a semi-professional Philadelphia city tour guide, historian of the St. Andrew’s Society of Philadelphia, President of the Walt Whitman Association, Secretary of the Camden Home for Children, and a member of the Board of the Delaware Valley Council of the Presbyterian Historical Society. He is a member of the Leadership Committee of the Presbytery of West Jersey and has served as President of the Board of the Haddonfield New Jersey Adult School Board and Vice-President of the local Interfaith Caregivers. An amateur wine-taster, David holds the Order of St. Vincent of Portugal for his “service” to that country’s wine industry in 1985.