Cawdor, originally Calder or Caddel, had been a Thanedom to the east of Inverness for centuries before the castle was built. The site for the original castle was on the level top of a steep and rocky bank sloping down to the Cawdor Burn, a tributary of the River Nairn. On the side away from the burn a dry moat was cut to offer further defense. Today the level grounds beyond the moat are shaded by magnificent great lime (linden) trees which guard the sweeping lawns and old-fashioned flower gardens. Originally the only trees would have been along the banks of the burn.

In 1454 the Thane of Calder received a royal license to build a new castle. Tradition holds that he had a dream that he should fasten a kist of gold to the back of a donkey and build wherever it first stopped to rest. The animal stopped under a holly tree above the burn. The tree still stands where it grew and can be seen in the vaulted cellar of the keep which was built over and about it in that year. In old pre-Christian Scotland the hawthorn was a sacred tree, being first to flower in the Spring, and the tree in the vault has come to be called a hawthorne. 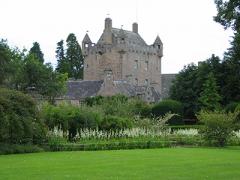 The keep which was begun in 1454 stands as the highest and central mass of the castle today. An earlier, and perhaps royal castle seems to have existed nearby since there is an entry in the Exchequer Rolls for 1398 of an outlay on `Calder Castle'. The style of the keep, with thick walls containing wall chambers for garderobes, bedrooms and closets, is typical of the fifteenth century in Scotland. The entrance door, now enclosed in later additions, still has the original iron `yett' or gate.

The keep consists of a vault built on ground level and containing the holly tree. Above this were two stories of one main room each with beamed ceilings and having access by a spiral stair in the wall thickness. The fourth story was also a single main room reached by the spiral stair and from which a straight wall-stair continued to the parapet and roof. However the room on the fourth level was vaulted in stone, allowing for a stone flagged roof to the building, later replaced by a raftered roof creating an attic. Each of the upper rooms had a fireplace in the wall. Some of the old stone corbels which carried earlier levels of ceiling can still be seen projecting from the interior walls. The east-facing windows of the main rooms in the Keep were enlarged in the 17th century.

The area within the dry moat and about the keep was originally enclosed with a wall, parts of which are incorporated in the later ranges of buildings built along the inside of the early courtyard, however these are not easy to discern, the later work being dominant.

Very likely some of the earliest additions to the courtyard would have included a Great Hall and Kitchens and possibly a barrack or dormitory on the north and west sides. The stables and other offices may have formed another courtyard to the south. The resulting arrangement of courtyards is still obvious in the later construction.

Archibald, second Earl of Argyll, succeeded to the earldom upon the death of his father Colin in 1493. His eldest son Colin would become the third Earl, his second son Archibald was granted Skipness in 1511 and his third son Sir John married Muriel, heiress of Sir John Calder, Thane of Calder in 1510.

In 1499, on the death of Sir John of Calder, the king had granted to Earl Archibald the right to decide whom Muriel would marry. The lands of Calder were fertile and the castle only 45 years old. Muriel was a red haired infant when her father died and the Earl, sensing that his control of the destiny of the child would not be easy at such a distance, decided to have her brought to Argyll.

Campbell of Inverliever on Lochawe was sent with his sons and followers to fetch the little girl. Tradition holds that her mother branded her with a key and her nurse bit off the tip of her finger for identification. After Inverliever had left the castle the Lady Calder sent word to her brother, Rose of Kilravock (pron. Kilrauk), who gave chase. Inverliever had his sons defend a bundle which was wrapped in the girl's shawl while he and the child escaped through the hills to Lochawe. None of his sons returned.

However the marriage turned out to be a happy and prosperous one. She had been born in the 13th of February 1498, was married at the age of 11, and died in about 1575 having produced numerous children. 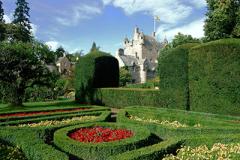 In about 1660-70 Sir Hugh Campbell, Thane of Cawdor, (1642-1716), undertook an extensive building effort. A broad stair was built on a rectangular plan adjoining the northwestern corner of the keep and linking it to the inner angle of a new "L" shaped range of buildings along the north and western sides of the original courtyard. The basement level of these appears to have survived from an earlier date and includes the present castle shop through which those who tour the castle leave.

The 17th century "L" range contains a large Hall or Diningroom with adjacent private anteroom, a withdrawing room and numerous bedrooms on the upper floors. Sir Hugh had a number of fireplace mantles carved in stone, one of which commemorates the marriage of his ancestors Sir John Campbell and Muriel of Calder.

In 1672 Sir Hugh had a stone carved heraldic panel installed over the front entrance of the new stair block in the north courtyard, now the main entrance, containing the Campbell arms with his initials and those of his wife, Lady Henrietta Stewart, daughter of the neighboring Earl of Moray. Similar initials appear on the dormer windows on the inside of the north courtyard but dated 1674, when the range must have been completed.

Above the head of the great stair is a vaulted charter room above which is a small chamber which can only be reached across the rooves and where, it is said, the Jacobite Lord Lovat was hidden after Culloden.

The entrance gateway and drawbridge, the parapet walk and corner turrets on the keep and improvements to the outer ranges of buildings to the south were all undertaken in the 17th century, mostly by Sir Hugh.

The south courtyard was renovated and the buildings enlarged in more recent times, but in the same style as the 17th century additions so that the castle appears as a cohesive whole, only the keep standing higher and in starker contrast to the later additions which surround it on all sides.

For several generations the family spent most of their lives in Wales after one of them had married an heiress of lands there in the 18th century. This meant that Cawdor never underwent the alterations which might have taken place had it been the main residence of the family. In more recent years the Welsh lands have been sold off and the family returned to Cawdor as their home.

The late Hugh John Vaughan Campbell, 6th Earl Cawdor of Castlemartin, 24th Thane of Cawdor, and his wife lived in the castle in winter and elsewhere on their estates in summer so that the castle could be opened to the public. The castle is managed by the 6th Earl's second wife Angelica Campbell (née Lazansky von Bukowa), Dowager Countess Cawdor.

Both the castle and the adjacent gardens are open to the public in season.