Castle Campbell is a medieval castle situated above the town of Dollar, Clackmannanshire, in central Scotland. It was the lowland seat of the earls and dukes of Argyll, chiefs of Clan Campbell, from the 15th to the 19th century, and was visited by Mary, Queen of Scots, in the 16th century. 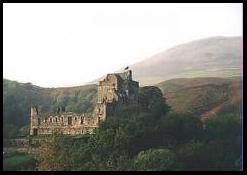 The castle was originally known as Castle Gloom, possibly deriving from the Scottish Gaelic: glom, meaning a chasm, and referring to the narrow gorges to either side of the site. The naturally defended position may have been the site of a motte in the 12th century. The present tower was built in around 1430 for John Stewart, Lord Lorne (d.1463), or one of his kinsmen. About 1460, the property was acquired by Colin Campbell, 1st Earl of Argyll (d.1493), on his marriage to Isabel Stewart, Lord Lorne's daughter. The first historical record of the castle dates from the following year, when Pope Paul II issued a bull against Walter Stewart, son of Lord Lorne, for attacking and damaging the "Place of Glowm". Campbell, who was at the papal court at the time, may have been instrumental in arranging the Pope's intervention. The tower shows signs of early rebuilding following this episode. 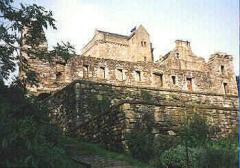 The acquisition of Castle Gloom expanded the power of the Campbell family, from Argyll in the west into central Scotland, and suited Colin Campbell's position as Master of the Household to King James III of Scotland, which required his frequent presence at court. In February 1490, Campbell petitioned the newly crowned King, James IV of Scotland, to formally change the name of Gloom to "Castle Campbell", and this was done by an act of parliament. The change in name may imply that the term "castle" was seen as particularly prestigious, requiring royal approval for its use. At this time, the castle would have comprised the tower house, with other buildings arranged around the courtyard and gardens outside. The east range was probably added first, and some time after the accession of the 2nd Earl in 1493, the large south range was begun. This building shows the influence of the contemporary works at Stirling Castle, now known as the King's Old Building. It included a state apartment of hall, outer chamber and bedchamber, with large south-facing windows overlooking the gardens, and a view across the Devon Valley. The range also provided additional private lodgings, and was accessed via two symmetrically placed stairways facing the courtyard. 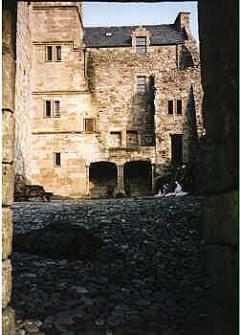 In 1645 Montrose's troops, on their way to the Battle of Kilsyth, laid waste to the lands around Castle Campbell, including Dollar and Muckhart. Many of Montrose's men were MacLeans, long-standing adversaries of the Campbells. The castle itself was undamaged, and no siege was attempted. In response, Argyll ordered the destruction of Menstrie Castle and Airthrie Castle, both seats of Royalists. After the execution of Charles I the Campbells initially supported Charles II, with Argyll placing the crown of Scotland on Charles' head at Scone in 1651. However, Argyll opposed Charles' invasion of England, and in 1652 he submitted to Oliver Cromwell's Commonwealth. Cromwell's forces were garrisoned in Castle Campbell in 1653. In July 1654, Royalist rebels attacked and burned Castle Campbell over two nights.

Argyll was executed following the Restoration of 1660 and his son, the 9th Earl, built Argyll's Lodging in Stirling rather than renovate Castle Campbell.  Apart from being briefly garrisoned during the Jacobite rising of 1715 the castle was abandoned, and in 1805 the 6th Duke of Argyll sold it to Crawford Tait of Harviestoun, an adjacent estate.

In 1948 the then-owners of the Harviestoun estate gave Dollar Glen to the National Trust for Scotland, who arranged for the castle to be cared for by the Ministry of Works. Restoration works have included a new roof on the tower, and excavations in the 1980s which revealed charred timbers from the 1654 burning. The castle is now managed by Historic Scotland as a scheduled ancient monument.